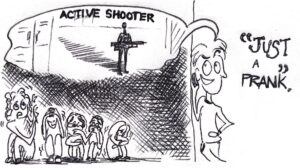 Early in the morning of Oct. 27, an anonymous caller alerted Santa Cruz High School officials that an active shooter was on campus.

School officials immediately called 911, initiating a massive law enforcement response of hundreds of officers.  At the same time, the school went into lockdown. Law enforcement rushed onto school grounds, searching the entire school only to find that the tip was about a classroom that didn’t exist. It was a prank.

And it wasn’t in isolation. Bay Area schools in San Jose, Oakland, Milpitas, South San Francisco and Woodside have experienced frequent false code reds due to a series of prank calls, known as swatting, suggesting that an active shooter threat is on campus.

Although prank calls like this might be intended as jokes, they are horrific, tasteless acts, causing unnecessary trauma. They undermine the ability of police to handle real shooting situations and force law enforcement to direct their attention away from actual situations that require their attention.

Additionally, spontaneous code reds can result in increased anxiety, trauma and other mental health issues. As a result of such prank calls, students are at higher chances of developing stress disorders such as Post Traumatic Stress Disorder (PTSD). Even though the code red barricading process may only last a matter of minutes, children undergo extreme levels of stress in the minutes they think that a shooter is on campus.

However, it is not just the students who feel the stress. Think of the parents who get a message from the school regarding imminent threats on campus and then have to wait hours to find out if their child is safe.

As the number of swatting calls increases, it also creates a lack of trust in actual code reds when real school shootings occur, akin to the Crying Wolf phenomenon from the Boy Who Cried Wolf fable. We do not want to reach a point where students or officials don’t believe in an announcement of school shootings, leading them to be more careless in taking safety measures. Likewise, if fire alarms are falsely pulled on a regular basis, we wouldn’t expect an actual threat to be a real alert.

Perpetrators need to realize that the negatives of prank calls greatly outweigh the immature enjoyment they can derive from doing it. We have gotten to a point where school shootings are not taken seriously. On forums like Reddit, users constantly make jokes about U.S. school shootings when they are anything but a joking matter. These prank calls only make the situation worse, and we should place a priority on giving stiff penalties to anyone who is caught making such a call.