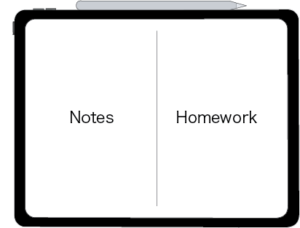 When students walk into Calculus BC teacher PJ Yim’s math class, they see him writing on his iPad instead of writing on the whiteboard.

After transitioning back to full in-person learning this fall, teachers like Yim, in addition to his students, continue to use iPads and similar electronic devices because of their convenience.

Over quarantine, many teachers like Yim, used iPads while doing lessons online. The tablet made the online teaching process easier because of better screen-sharing and organization.

iPad sales rose by over 31% during the pandemic, largely due to remote work and learning trends, such as students using tablets for schoolwork. iPads cost anywhere from $300 to $2,200, and the Apple pencil, a stylus, costs $100.

Yim started using an iPad to teach around four years ago. Using an app called Notability, he could easily scan his work into PDF form for students to reference.

Yim feels that iPads aid in students’ learning. When students have questions, Yim can quickly add to his notes so that all the information is in one place for students.

Before quarantine, Yim said he had one or two students per class who used iPads, but now, roughly four to five students use iPads in his classes.

Precalculus Honors and Calculus teacher Kristen Hamilton also uses her iPad to teach her classes. She wrote a grant for the math department in 2019 to fund the purchase of iPads, Apple pencils and Apple TVs to screen share to classroom projectors, and they received the iPads in November 2019.

Before using iPads, Hamilton used a document camera called ELMO. However, one major downside that Hamilton encountered with the document camera was that students would sometimes see her hand rather than what she was trying to show them, a problem easily avoided with an iPad.

“I think that the iPad is super clean and easy to use, and you can easily export your work as a document for students to access on Canvas or Google,” Hamilton said.

One problem Hamilton has with her iPad is that she finds it challenging to draw straight lines with the existing technology, so she often finds herself going back to her ELMO when teaching subjects such as geometry. Overall, however, she still uses her iPad as the main tool for teaching.

Hamilton also bought an iPad for her daughter in the summer of 2018, before her daughter’s senior year. Hamilton’s niece had come over from Germany, and had used solely an iPad for taking notes during medical school.

“I was astonished and thought that this technology was awesome, so I bought it for my daughter,” Hamilton said. “And when the pandemic hit last year, she literally did everything on her iPad.”

Hamilton’s experiences closely mirror students who have transitioned to iPad usage, such as sophomores Arjun Raje and Michelle Wan.

Wan mainly uses her iPad to take notes in her Spanish 4H class — her other teachers only allow hard copies in class. She transitioned to using an iPad during quarantine because she had always wanted one and she disliked the hassle of constantly printing out papers.

“Using the iPad is so much more convenient for me,” Wan said. “It’s a lot easier to annotate PDF documents, and it’s easier for me to stay organized.”

Similarly, Raje mainly uses his iPad to do math homework for his Calculus class through the Notability app; afterwards, he easily exports his homework and submits it to Canvas for grading. He also uses his iPad to study for tests.

Raje prefers using his iPad to using the traditional pencil and paper because it’s easier for him to stay organized, and he finds it easier to draw clean lines and graph functions using Notability. After finishing, he uploads the PDF of his homework to Google Drive, and he can easily submit this PDF through the Canvas app on his iPad. Though the iPad and apple pencil were expensive for Raje to purchase, he doesn’t regret his purchase.

“I’m so glad I got my iPad,” Raje said. “Things would’ve been much worse if I wasn’t able to use it.”