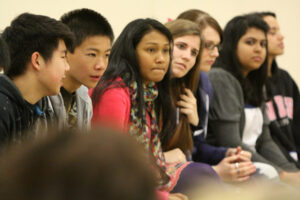 Students at Challenge Day on March 10

When junior Esha Roy received an enigmatic note in her third period AP U.S. History class regarding an event called Challenge Day, the only thing she knew about it was that she would miss an entire day of school if she chose to participate. “I was intrigued by the prospect of communicating on such an essential level with my peers,” Roy said.

Roy and 99 other students, many of whom entered under the same pretenses as Roy, soon discovered that Challenge Day, held March 10, would be something entirely different and more profound than a missed school day. “I won’t be forgetting it anytime soon,” she said.

Twenty-five students from every grade entered the gym to a round of high fives and hugs from teacher chaperons. “It was just a very welcoming environment,” sophomore Megan Kao said. “I don’t think anyone ever felt out of place.”

Students participated in introduction activities with faculty and other students—effectively breaking out of their comfort zones, and establishing a unique rapport with one another that Kao described as “the kind I thought only family members could have.” Many of these activities amalgamated both physical and emotional components, such as running around trying to hug as many people as possible and a Challenge Day version of musical chairs.

After a lunch period, things became more serious. Students were separated into groups of six with an adult facilitator and spent time talking about personal challenges and hidden qualities about themselves. “A lot of people broke down because everyone was so nice,” said Kao.

The students also participated in a “cross-the-line” activity where the Challenge Day hosts asked the students to cross the line if they had been affected by a particular experience such as teasing, family issues, or personal problems. A seemingly trivial game soon became an intensely emotional experience. “It was really the crux of the day,” said Roy.

The day culminated in an activity where a microphone was set-up and students were given the opportunity to discuss how social barriers at school affected their lives. “Whether it was apologies, gratitude, or a personal anecdote, everyone learned from the experience,” Kao said.

But the greatest task, both Kao and Roy acknowledged, is sustaining the impact of Challenge Day. “The repercussions of Challenge Day can’t end here,” said Roy. “The real challenge is continuing the love and kindness that the day brought out.”