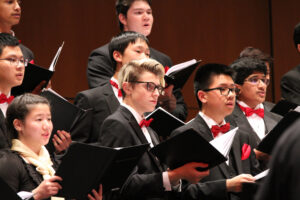 The choir, shown here in 2019, will be taught by a new long-term substitute teacher, Beth Nitzan.

The school has hired three new long-term substitute teachers this semester as well as a staff member who will hold the dual role of campus supervisor and health clerk.

First-semester choir sub Kristina Nakagawa received widespread praise for the work she did, but has moved on to a new position. A substitute for the choir position became necessary after teacher Andrew Ford went on leave last spring after being arrested for a sexual assault allegation from 2004-2006.

Nitzan will serve as choir director until the end of the school year. Whether she’ll remain onboard will be determined later, Louie said.

Nitzan studied music at Pomona College and finished her master's in choral conducting at San Jose State University (SJSU) last May. Before coming to SHS, she taught middle school and high school choir in Sacramento as well as classes at SJSU while finishing her master’s degree.

“She’s an expert — an ace in the hole,” Louie said. “She's been teaching choir for a number of years and came highly recommended and actually recruited by our band teachers. The fact that we have such a prestigious music program and that she's been able to come and continue to support that is a blessing.”

Nitzan currently teaches two periods of choir and said she has appreciated support from her students and colleagues.

“Everyone has been so kind and welcoming even though we're virtual at the moment,” she said. “My students have really helped me get going in class and had such positive attitudes.”

According to Louie, hiring Nitzan was an opportunity only allowed by this year’s unique transition to online education, since Nitzan currently teaches from outside of the county.

Nitzan said she is excited to teach at Saratoga High.

“I grew up in the Bay Area, and I'm happy to be working in the community again,” she said.

In an effort to maximize student safety amid the pandemic, the school has hired Afnani as campus supervisor and temporary health clerk.

Afnani will replace Helen Jarrett as campus supervisor and Janet Verson as health clerk for the spring semester. Verson, in addition to working with special education students, has transitioned to more clerical duties such as filing paperwork and documenting immunizations.

As health clerk, Afnani administers treatment for student injuries while maintaining a safe environment. She will play a crucial role as sports and robotics cohorts return to campus, and her job will only grow more important as the school starts the slow transition back to in-person education.

Prior to her employment at SHS, Afnani served as a clerical and health aide substitute at the San Jose Unified School District.

“We needed a temporary health clerk who was willing to put themselves in harm’s way in order to serve our students should something happen — a sprained ankle, cramps or even COVID symptoms,” Louie said. “Based on her experience, we found that she was the best candidate for the job.”

Although McCrystal is formally retired, she is still working with Love and Heuschkel on curriculum to ensure a smooth transition for both teachers and students.

“Everyone has been wonderful and very welcoming: students, families, fellow teachers and all the admin team,” Love said. “I’m looking forward to spending more time with everyone and getting to know each other more.”

In the past, Love taught physics, chemistry and algebra at Futures Academy in Cupertino and received her master's degree in chemistry from the University of Ferrara in Italy.

Heuschkel graduated from UC Davis with a bachelor's degree in physiology and attended business school at Sacramento State, where she attained a degree in accounting. After serving as a certified public accountant for multiple years, she decided to pursue a career in education, working as a substitute teacher at a middle school in San Jose and teaching biology at Independence High School during the 2020 fall semester.

Now, in addition to teaching at Saratoga, Love and Heuschkel are in the process of formally training at the SJSU Teacher's Program, which Louie said is an opportunity for the pair to develop as teachers by working with the school's relatively veteran teachers.

“If we're talking about an ideal environment to learn how to be a teacher, they get to do it here,” Louie said. “There's an opportunity for them to collaborate with and learn from the experts we have in our departments, and at the same time for them to cut their teeth by having their own classes and teaching with our students.”

According to Louie, although switching staff during the middle of the year is not ideal, the school is doing its best to mitigate its negative impact on students.

“In an ideal situation, you have the same teacher the entire year, and that teacher gets to know the students and grows with them,” Louie said. “But sometimes, situations come up that we can’t plan for, so we as teachers and as an admin team have to do our best to accommodate that.”

As such, teachers like McCrystal are working with their temporary replacements to mitigate the effects of the transition by providing advice, schedules and curriculum.

“With that being said, long-term subs are obviously able to tinker with the curriculum and make it work for themselves,” Louie said. “They're not just robotically following their counterpart’s processes.”

Despite the change, Louie said the collaboration between teachers and support from students will ultimately best serve students given the circumstances.

“Being able to find highly qualified teachers in the middle of a school year isn’t the easiest thing in the world,” he said. “And I think that we've managed to strike gold three times.”