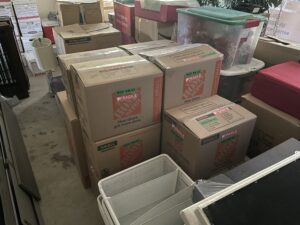 My remaining stuffed animals sit in a packing box.

Part of the journey is the end.

A while ago — I can’t quite pinpoint the year — I went to Circus Circus in Reno with my family. There was a ring-toss game with a stuffed lobster prize I wanted very badly.

Out of sheer luck, my brother won the lobster and kindly informed me that it would not be shared with me; I rightfully threw a tantrum. Thankfully, my dad stepped in to play the game again and won another lobster.

The lobster — who I aptly named Lobster — came home to my and my brother’s elaborate world of stuffed animals where each plush had a role in a fictional society we spent years creating. Each animal had a name, voice and position on the fictional world’s famous baseball team (before you judge me, remember I was very young).

But now, many years laters, I no longer remember Lobster’s voice nor baseball position. And so, Lobster has found his way to a box labeled “donation.”

My family is in the process of moving houses — we’re staying in Saratoga, so the district doesn’t need to kick me out — and I decided to go through all of my childhood toys to determine what I still wanted before packing them away. Chief among these toys were my stuffed animals.

My brother and I have accumulated about 150 plush toys, and this is after we donated 100 of them five years ago. Some of them are as old (if not older) than the two of us, and some are cheap circus toys literally held together by a thread.

These stuffed animals are present in almost all of my cherished childhood home memories. They crowded my crib and bed at night (I had to sleep with ALL of them, not just one), they were occasionally the ball when my brother and I played indoor baseball and they provided me comfort after I underwent hernia surgery.

The toys were once my entire world, but now they’re little more than objects taking up space in my room.

At first, it felt weird to discard things that once held so much sentimental value. For years, I held on to them because I felt I had to; how could I get rid of such precious things? But the more I thought about it, the more I realized that there was no need to keep many of them; more importantly, there was no need to cling to a past that I am rapidly growing up from.

I was able to find a balance between getting stuck in the past and running away from it. I ended up donating the large majority of my toys (like Lobster), but I’m still keeping the ones I remember vividly.

The legacy of my and my brother’s fantasy world will live on through the survivors — till death (or the next Goodwill run) do us part.