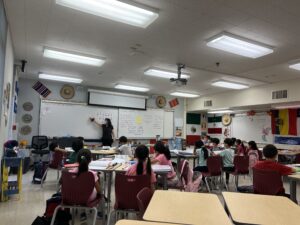 Photo by Zack Zhang
The students sit in one of the many classrooms rented by MLCC and listen carefully to their teacher as she teaches on a Saturday morning.

Permalink
The Chinese school organized by the Mandarin Language and Cultural Center (MLCC) rents classrooms at SHS for their over-400 Saratoga-based student population.

Dozens of young children enter 25 classrooms on campus most Saturdays to learn Chinese in weekly classes hosted by nonprofit educational organization Mandarin Language and Cultural Center (MLCC). The district receives money in exchange for renting out the classrooms.

According to Jane Chen, the principal of MLCC, the future of Chinese language education in the area seems promising as the Chinese program has seen an increasing number of students enroll over the past few years.

Currently, the organization holds classes in two locations: Milpitas High and Saratoga High. Almost 1,000 students from kindergarten to 11th grade are enrolled in the program, with around 400 taking classes at SHS.

MLCC was founded in 1992, and has held classes since 1997 with the original goal of helping strengthen language skills for Mandarin-speaking children raised in the U.S. However, as the number of younger students whose parents don’t know Chinese has grown by 16% annually since 2010, according to China-United States Exchange Foundation, MLCC has now expanded their teaching for all of those who are interested in learning the language.

MLCC uses teaching material (textbooks, workbooks, CD files and articles) from Taiwan for students below 7th grade. Students in 8th grade and higher use U.S.-based materials to prepare for the AP Chinese test.

“Around 80% of MLCC students speak Mandarin at home, while the remaining 20% do not,” Chen said. “The Chinese school prepares different teaching materials to fit the needs of each class of students, no matter where students are in their learning journeys.”

Many SHS students who attended MLCC classes say they enjoyed the program and gained a lot from it.

“The classroom environment and learning experiences were definitely unique and fun,” said freshman Millie Wang, who attended the Chinese school for four years.

“I went there mainly because it was close to me, and three of my friends still go there,” Wang said. “I learned vocabulary, traditional stories and culture.”

Some students later volunteered to become Teaching assistants (TAs) to give back to the community. TAs prepare materials before class, lead group activities, test students on vocabulary, keep students focused during class and assist teachers whenever necessary.

Senior Morris Yu was a student at MLCC for 10 years and is in his second year of being a TA for the Chinese Foreign Language class 7.

Being a TA, however, comes with challenges. Yu said the most difficult part is keeping students focused during class.

“Whether they’re too excited and talk with friends or bored out of their minds, it can be difficult to keep them focused without disturbing others — especially when one tried to bribe me with an $80 Pokémon card,” Yu said.

When he was a student, Yu’s class didn’t have TAs and teachers were strict, so he enjoys “being chill with the kids” as it “keeps a pretty good energy in the classroom.”

“Having spent over 10 years as a student, being on the other side of the spectrum was satisfying,” Yu said. “Being able to share what I’ve learned when I was a student or make class more enjoyable and fun has been my favorite part.”

Having many successful students coming out of the program in the past 25 years, Chen said MLCC hopes to continue promoting Chinese culture in the future.

“We wish that our students who are born of Chinese heritage can become a bridge between the two languages and cultures when they grow up, and those who are not to be familiar with a second culture so it allows them to have another perspective in mind when examining social issues,” Chen said.