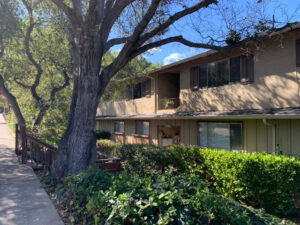 Permalink
Students detail the unique lifestyles they lead living in different areas of the city.

Despite only spanning 12.78 square miles, Saratoga  holds vastly different neighborhoods in character. From right across the street from Saratoga High School to the golden triangle to downtown to the mountains, four students shared their experiences of living in their own sector of the city that features standard suburbia mixed with downtown and rural living.

Senior Andy Chen lived in Cupertino for much of his early childhood before moving to Saratoga when he was in third grade. He transferred to the Saratoga educational system the year afterwards. A major difference between his time in Cupertino and Saratoga was his proximity to the school: Here, he lives in Saratoga Legends, a housing development just across Saratoga-Sunnyvale Road.

A 5-minute walk, 2-minute run or 1-minute drive away, Andy said the convenience of being able to get to the school quickly — especially before he could drive — is the best thing about his house’s location.

“I definitely think I’m very lucky to live where I live,” Andy said.

Nevertheless, Andy said he is still often late to school as his close proximity has led him to underestimate how long it takes to get to campus.

Additionally, Andy’s friends often comment about seeing his dad walking their dog around the neighborhood, which he finds really funny.

From the social front, whenever Andy’s friends want to hang out, they always go to his house because of its accessibility to the school, which he jokingly called an “inconvenience.”

“The school really is the hub of student life,” Andy said. “Even if people aren’t learning [in class during school hours], they come to the school to hang out or play basketball. If you’re going to hang out with friends, you’d usually meet at school. So I think it being so accessible is definitely a blessing.”

Sophomore Rinna Iyer has lived in the Golden Triangle all her life, describing it as a peaceful area to meet new people. In close proximity are a creek and Congress Springs Park, with Argonaut Elementary a couple minutes away.

It takes about seven minutes for Rinna to drive to school. The Golden Triangle is generally traffic-free, the most traffic being at the entrance of school.

Rinna also enjoys biking around the streets near her house, as well as going on walks on trails nearby. She especially likes going on hikes along Joe’s Trail, a trail that passes through Congress Springs Park, with her family and family-friends.

Pets are a significant part of the Golden Triangle community, especially because the spacious, traffic-free streets are ideal for taking them for walks. According to Rinna, most people own dogs.

“If by any chance we see neighbors walking their dogs, we get to meet and talk with them,” Rinna said. “I think it’s a great place to have a pet because having our pets meet allows neighbors to have better connections.”

Junior Clark Torres, whose parents are divorced, often goes to Fresno to visit his dad. He said compared to Fresno, Saratoga has more hills, is more Libertarian politically and is dominated by an Asian population.

Clark lives in an apartment building downtown near Saratoga Elementary School, a 2-minute drive from the high school. Because downtown is a tourist area, Clark said it’s crowded with people walking and driving around on the weekends.

“There’s lots of people I can talk to since everyone’s out and about,” Clark said. “It’s made me more of a social person.”

One of the biggest perks of his location is the convenience in being around all the shops.

“There’s always stuff going on here — stores and restaurants to go to and lots of recreational activities to do,” Clark said. “There’s a bunch of dinner places, hair salons and massage places you can go to. There’s also Saratoga Springs, which is just a little bit down Highway 9.”

Additionally, he said downtown is a very safe place: Out of his seven years living there, his house has never gotten broken into, and his neighbors have not had many problems either.

Most notably, downtown’s hilly landscape has fostered his passion for skateboarding, which he does every day after school along the streets of downtown. While the majority of people are usually nice about him skateboarding, he noted that he has been yelled at a couple times by shop owners.

Since there are many high school students who live downtown, Clark often skateboards with friends.

“Downtown is cool for hanging out with people,” Clark said. “It’s convenient. Even before I had a car, there was always someone to hang out with.”

It’s 3:30 a.m., and senior Shaavari Malladi slumps down in her blankets to watch a horror movie with her friends. “The Ritual” is set in an eerie forest, unsettlingly similar to the location of Shaavari’s home. With big glass windows outlooking a dark emptiness, her house is nestled in the hills above Monte Sereno.

Around her house, Shaavari spends her time walking in a creek along her house — a therapeutic way for her to connect with nature. To promote sustainability, she eats what she grows from her home garden, consisting of tomatoes, leaves, flowers, and squash.

“My home is as close as you can get to nature. Sometimes I get coyotes or deers coming up to my front door,” Shaavari said. “I do miss the convenience of my old house that was closer to my school at the time, but nothing beats being able to zip down my backyard zip line for fun.”

Along with wild animals, Shaavari tries her best to avoid being attacked by all kinds of bugs.

“If you like protein, it’s readily available,” Shaavari said.

The isolation is a factor Shaavari likes about the location of her home, escaping traffic and welcoming tranquility. While most people have the option of practicing driving around their house, that’s not possible for Shaavari who isn’t keen on practicing driving on narrow, curvy roads — where one wrong turn can make you drive off the mountain cliff.

“It’s very isolated and it takes a long time to get to my house, but it’s nice and I wouldn’t trade my house for any other house,” Shaavari said. “It takes 11 minutes to get to my house, so it’s hard to walk to places and it’s difficult for my friend’s parents when they want to drive up here.”