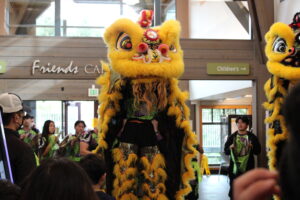 Photo by Emma Fung
The percussionists surround the dancing lions, accompanying them with a rhythmic beat.

The entrance of the Saratoga Library boomed with the beating of tanggu, a traditional Chinese drum, as children and parents crowded around two twirling lion dancers.

Lion dancing was one of the various activities hosted by the Saratoga Library on Jan. 14 during its annual Lunar New Year event. Lunar New Year fell on Jan. 22, ringing in the Year of Rabbit.

The lion dancing took place in the entrance of the library and was performed by a nonprofit organization, the Rising Phoenix and Lion Dance Association. The lion dancers were dressed in traditional lion costumes decorated with multicolored patterns. Throughout the dance, the performers traveled through the entrance of the library, the children’s section, the adult’s section and back.

A group of percussionists accompanied the lion dancers by beating a pair of cymbals, a tanggu and a gong. Directing the percussionists and dancers was Kevin Nguyen, the lead coordinator of the Rising Phoenix lion dance.

“I’m kind of like the [performers’] eyes outside of the line and directing which area to walk around,” Nguyen said. “I also signal them when to start the routine, and gather up anything that clashes with them.”

As a member of the Rising Phoenix and Lion Dance Association, Nguyen feels that performing at different events like the Saratoga Library’s Lunar New Year activities helps connect him to his heritage and to the Asian community.

“When [our members] are able to practice this traditional art, they’re able to learn more about its roots and origin,” Nguyen said. “At the same time, we’re also being more involved by performing traditional art that’s been around for thousands of years.”

Along with the exciting lion dance, there were many other events the library offered for this traditional holiday. One of these events was a performance by the Aimusic music school, which is managed by Emily Bahn. The organization is part of the Firebird Youth Chinese Orchestra, which started in 2000.

Aimusic is a youth group that performs music with traditional Chinese instruments. They typically schedule their performances around Lunar New Year and have performed at various locations, including the Saratoga library. Bahn said that being a part of the orchestra allows the performers to learn more about their Chinese heritage.

“These instruments are all very old and traditional,” Bahn said. “We live in a western country, so by learning how to play them, they are able to connect more with their roots.”

At the Lunar Festival, the orchestra performed multiple traditional pieces, most of which were solos. Among the talented performers was Madelyn Cheung, a sixth grader who started playing the yangqin, a traditional chinese string instrument, and the guzheng, a Chinese zither instrument, ever since she was in second grade.

Cheung is one of the younger members in the orchestra, as most of the other members are in high school. Nevertheless, she secured a solo piece called the “Green Bamboo Forest” and was in the front center for the ensemble performance. Although surrounded by older kids, Cheung is thoroughly enjoying her experience in this group.

“I really like being in this orchestra because it helps me connect with people and my culture,” Cheung said.