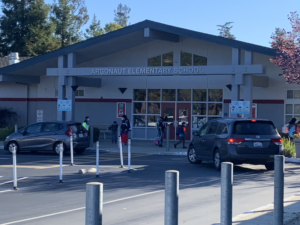 Wearing masks and standing 6 feet apart on Feb. 10, administrators and teachers at Argonaut Elementary directed arriving students into socially distanced lines in front of the office. As teachers led students to their on-campus classrooms, the first instance of in-person learning in Saratoga since March 2020 officially began.

Argonaut Elementary, Foothill Elementary and Saratoga Elementary all recently returned to campus in a hybrid learning model. Students from kindergarten to second grade began returning on Feb. 10, while those in third through fifth grade returned after the break on Feb. 24.

Because younger students are less likely to get COVID-19, do not move classrooms as often, and generally have fewer students, elementary schools have been able to reopen earlier than high schools. Those in seventh grade through 12th grade could only return to school after the county entered the Red Tier.

Teachers were conflicted on whether returning to in-person learning was a good choice. Kelly Kannberg, a fifth-grade teacher at Argonaut Elementary who returned to in-person learning, observed the impact of distance learning on her own children and believed that getting all students into real classrooms was the highest priority. Another Argonaut teacher, who asked to remain anonymous, had a different opinion.

“I still strongly believe that staying distanced until teachers and students are vaccinated is the safest option and makes the most sense,” the teacher said. “However, the number of students that wanted to return was more than could be safely placed in one classroom. Ultimately, I did it for my students.”

While making the decision to come back to campus, the district used various tools including periodic surveys to students and families. According to one survey conducted by the Saratoga Union School District (SUSD), 45 percent of K-2 families chose distance learning, 21 percent chose the in-person model, and 34 percent chose remaining with their teacher in either distance or in-person learning.

The cohorts, consisting of six to 12 students, are staggered throughout the week, with Cohort A attending on Mondays and Tuesdays and Cohort B students attending on Thursdays and Fridays. In addition, because the cohorts were restricted to small sizes, some students have needed to temporarily change schools. In preparation for this possibility, grade-level teachers across the district have kept their educational curriculums relatively similar throughout the year.

While most classes have a mix of students learning from in-person and remote, they all operate on the same schedule. They also all follow the same curriculum and, despite being in-person, students still use Zoom and Google Classroom to access assignments and connect with their distance-learning peers. Teachers also broadcast lessons live to distance-learning students.

Some teachers have found the mixture of in-person learning and distance learning to be incredibly tedious and exhausting.

“Having to monitor students in the classroom to make sure they're on task and following safety protocols while also attending to students on a screen and needing to check Zoom for raised hands and comments in the chat… I'm wiped out by 1:30 p.m.,” the Argonaut teacher said. “I don’t think it’s sustainable.”

In order to be allowed on campus, each student must verify that they completed the health screening and had their temperature checked. The district also recommended that students be tested for COVID-19 before in-prison school began and every two weeks while in the Purple and Red Tiers. Teachers report that students have been good about following in-person safety regulations, but are a bit concerned about the social distancing protocols.

“I think part of this is due to them not being able to hear each other because of their masks,” the Argonaut teacher said. “It's really hard to keep that distance in a classroom, and outside of the classroom kids are used to being closer than 6 feet.”

To promote further student well-being, the district is also allowing students to use the playground and fields. These areas are disinfected before student usage, and classes are rotated through the different areas to maintain social distancing and stable cohorts.

Teachers reported that students have begun to bond more through their social interaction in and outside the classroom. They also observed that some classmates who are still learning virtually have felt left out from everyone else.

“My own students that have come back to in-person learning seem so happy and benefiting socially,” Kannberg said. “They are playing wall ball during recess and sitting with friends having lunch.”