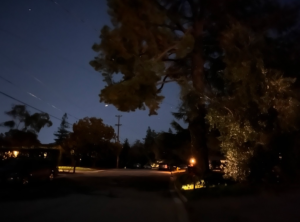 Permalink
I sometimes take walks around 10 p.m., amidst an ambience specific to Saratoga because of its lack of streetlights.

On the outskirts of Silicon Valley, nestled on the foothills of the Santa Cruz mountain range, lies a small town called Saratoga. Its 40,000 inhabitants live on the land of once proud orchards, which were subdivided in the mid-1900s into the sprawling neighborhoods of today.

I remember the first day my parents drove into Saratoga. It was strange, coming from a neighborhood in San Jose with narrow streets and stereotypical, picket-fenced houses, and suddenly seeing sprawling, mansions interspersing run-down houses and endless deadends that splintered off from bustling roads — a confusing layout that my friend said looked as if “the city planner scribbled on a piece of paper.”

Weirdest of all, it was dark; flashes of lights from far-away houses were the only source of light in the pitch-black night.

During my first night-time outing, I noticed that Saratoga lacked street lights. My parents’ car, an old Acura, had feeble headlights that failed to pierce far into the night, a fact I didn’t appreciate until much later in my life.

To be frank, I was scared of the night when I was younger. The dark hid monsters who feasted on children, and I couldn’t walk around a dark house without flicking on every single light switch. For me, night was a time to stay inside, bundled up in blankets while building “forts” with my older brother, although he soon graduated from these childish games.

In middle school, however, I outgrew my childhood phobia and began to appreciate the ambience that the lack of streetlights lends Saratoga. I started to go on walks at night: short, infrequent trips into the darkness that lay beyond my house.

Nighttime walks, with only the dark quietness of Saratoga to accompany me, have been some of the best times of my life. Stillness and melancholy hang in the air, like fog on a cold morning; the bustling of cars crossing Highway 85 rushes like a gentle river in the background; the sounds of crickets pierce the air like shards of glass.

These walks are refuges that help clear my mind. Usually, when I feel overheated or overwhelmed by work, I’ll take a walk outside — sometimes in just a T-shirt and pants. The cool wind wakes me up, and on clear days, the moon and stars cast a dim glow onto the resting giant that is Saratoga.

I sometimes like to look at the scenery when I take my walks — trees that look different at night than during the day, flowers whose scent I can smell from a block away and houses that illuminate the dark.

I pass houses that are pitch-black and those that are brightly lit, trying to imagine what the people who live in those houses are like. The pitch-black house is that of an old grandma, one who wakes up early every morning to volunteer at Argonaut Elementary. Inside the brightly lit house, I picture an overworked student struggling under the SHS workload.

When I go on walks at night, I take two things with me: earbuds and a lantern. Earbuds heighten the experience with music — I usually listen to classical — and the lantern is for warning drivers that there is someone on the road. I often feel like a Hobbit, holding a small lantern against a sea of black, venturing through the night.

When I finish my walk and return to my house, there is a shock as I adjust to the warm environment. Afterwards, I’ll either head straight back to my room to finish my homework or lounge on my couch, cradling a cup of warm hot chocolate.

The safe environment in Saratoga that allows me to walk alone at night is something that I am immensely grateful for.

These nighttime walks are something that I’ll never forget, and though the lack of streetlights scared me as a child, I’ve come to appreciate their absence.