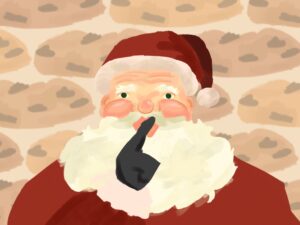 Permalink
The jolly man who flies all around the world giving presents to children is real, due to many valid reasons.

On Christmas Eve, Santa Claus zips through the cold, wintry night on his sleigh pulled by his eight reindeer, distributing presents and toys to kids all around the world just in time for Christmas morning.

As children grow older, most stop believing in the round jolly man — but there are many concrete reasons proving the famous icon is real.

To start off, Santa’s beard is too silky and smooth to be fake. He has to be making regular trips to Ulta Beauty to pick up hair care products to keep up with that 10-step beard regimen.

When he tumbles down the chimney and lands with a small thud, brushing the dust off his snazzy, red suit, he double checks his naughty and nice list. Santa knows that red is always in style during the holidays because of all the fashion magazines he reads.

As he makes his way to lay the presents under the bright Christmas tree, he makes a pit stop to gobble up the treats laid out for him. Santa is an avid milk consumer as he gulps down a large, warm glass of milk with his cookies. I am sad to say, but milk drinkers are real.

When you see his picture, Santa Claus is a chubby human. Sorry Mr. Claus, the camera doesn’t add 10 pounds, but the cookies definitely did. Since many Americans are obese, he fits right in.

After he rubs his stomach in content, he puts the last of the toys in the stocking hanging above the fire before shoving himself back up the chimney and onto the next house.

The reason for which he doesn’t just enter and exit through the door baffles me — honestly, an attention seeker.

During the holiday season, Santa is found everywhere: in the mall, in offices or hospitals. The real one has to be hiding within the numerous red suits and beards.

And we can’t forget, Santa has his own tracker (NORAD) that follows his movement as he makes gifts and flies all over the world, an email address (santa@officialsantamail.com) and a mailing address at 123 Elf Road, North Pole.

So the case is closed: Santa is in fact real — a very credible human with impeccable skin care and fashion sense.