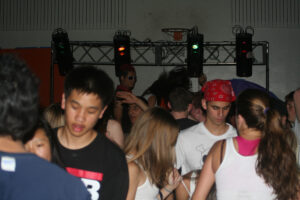 Dozens of students dressed up as war and peace, cowboys and Indians, beauty and the geek and in black and white filled the Small Gym during the Sadie Hawkins dance themed “Opposites Attract” on Feb. 27.

“I think the dance was successful. I don’t think there were any major problems so it went well,” said dance commissioner Stacy Ku.

Sadies was canceled last year due to alcohol issues at the previous Blacklight dance held in December. This year, Sadies took place but was moved up from its typical occurrence during Spring Fling week to February. Otherwise, It would have coincided with other events such as Bombay in the Bay and junior and senior prom.

“I didn’t care that it was moved earlier, it didn’t really make a difference,” said sophomore Emily Hsia.

At dances the administrators sometimes encounter problems with students, but there were no serious issues with behavior at Sadies.

“Was the behavior less than perfect? Yes. But was it bad enough to be an issue? No,” said assistant principal Karen Hyde. “It was better than the dances in the years before.”

Though students had an enjoyable time, one thing that many of them were disappointed about was the music.

“I thought the DJ kind of sucked,” said Hsia. “He played bad techno club music, but the dance was still good.”