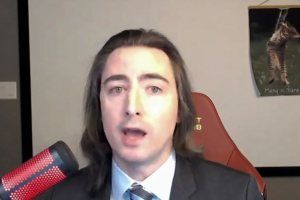 Keith Gill at the Gamestop-Robinhood hearing on Feb. 18.

The trend for buying Gamestop, Blackberry, and AMC Theatre stocks was undeniably exciting. I wasn’t even subscribed to r/WallStreetBets when the movement started, but the excitement spread practically everywhere.

It started with a single Reddit user, who started buying Gamestop stocks nearly two years ago with the belief that it was undervalued, but it wasn’t until January that a movement started, dedicated to pushing the Gamestop stock (GME) price up to punish the hedge funds that were betting that GME would go down.

Of course, r/WallStreetBets exploded with activity: thousands of posts, all dated at the end of January, most exploding with upvotes and comments, as well as costly awards — ironic, considering the topic was about screwing over big corporations. Even without taking part in it, the excitement was tangible. But when Robinhood, a popular trading platform, started limiting trading on several stocks, including Gamestop, r/WallStreetBets users quickly took up their pitchforks.

A lot of the anger was unjustified. Robinhood had to go through a middleman, called a clearinghouse, to complete trades. Because of additional requirements imposed by their clearinghouses, Robinhood was essentially forced into limiting the trading of some stocks. The only thing Robinhood was responsible for was their lie that the trade limitations were meant to protect the consumers.

Even so, the reaction to Robinhood was overboard. Boycotting the service or expressing frustration would be reasonable, but what some r/WallStreetBets users did instead was not. The Robinhood CEO Vlad Tenev received death threats, resulting in him having to stay in a hotel. The whole fiasco is just another reminder of how toxic certain online communities can become through mob mentality.

r/WallStreetBets doesn’t have the best of behaviors in general. There are heaps of self-deprecating jokes, which of course I can appreciate, but also a lot of ableist language — language discriminatory against people with disabilities. The users of r/WallStreetBets see it as inside humor, so any complaints about the words used are just ignored. One user even said that it was clear that “astroturfers” (accounts made by companies to push an agenda) were just “cosplaying as real posters” because they didn’t use the slurs in the same way.

The entire situation, from the point of view of someone who doesn’t usually follow stocks, has been pretty hilarious, but the growth of r/WallStreetBets raises many hard questions for regulators and Reddit itself. Reddit needs to make sure the community is well moderated, although I imagine it’d be hard with nearly 10 million users. As the meme goes, these apes together are definitely strong, and they must be kept in check.