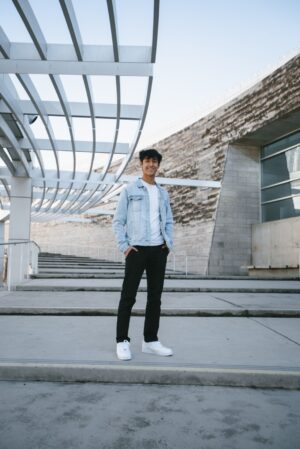 As the pandemic wore on in 2020, it became increasingly clear to senior Isabelle Lee, head Benefit Club Commissioner, that the annual fashion show featuring more than 200 student models in the large gym was doomed.

Instead, the commission will produce a fashion magazine with various spreads highlighting different themes, such as “Girls Night Out,” “Outdoor” and “Fun in the Sun.”

Rather than borrowing clothes from a designated store as in the past, models now have to select their own garments that fit their respective theme. Several stores, such as Los Gatos’ Kische Boutique, provided coupon codes to be included in the magazine.

While purchasing their own outfits was daunting to many students participating in the magazine, some, like junior Ishaan Bandhari, said the change provided more room for models to express themselves.

“I felt like we had a lot more freedom to buy whatever we wanted rather than being limited to a specific store or set of clothing,” he said.

Although the overall level of participation fell to around 80 participants, Lee realized that creating a magazine with fewer students is easier.

“Having fewer pages will ultimately make the magazine more profitable, which just means we can donate more money,” Lee said. “At the end of the day, everything we do comes down to how much money we can raise for charity.”

This year, the commission will donate the proceeds from the magazine to the Felton Fire Protection District in light of the recent California wildfires. This organization was suggested by assistant principal and supervisor Matt Torrens, who wanted to help many of the staff members who were affected by the fires.

Along with the magazine, the club will also raise money through an online auction in lieu of the silent auction that typically precedes the show in the gym lobby.

Senior club commissioners Katie Chen, Allison Ha and Michelle Wu are organizing the auction while Lee along with  juniors Grace Hsu and Tiffany Wang are focusing on the logistics of the magazine, which they hope to publish in late April.

“None of us have extensive graphic design experience, especially because this is the first fashion magazine that SHS has ever produced,” Lee said. “One of the big challenges for the design group right now is creating something that looks professional and clean instead of a random photo collage of a bunch of students.”

Another challenge for the commissioners has been advertising the Benefit magazine to freshmen. Without an in-person club day to introduce the program, Lee said that communicating the purpose of Benefit to those without prior knowledge of the club has been difficult.

Even so, Lee believes that with the help of Spanish teacher and supervisor Stephany Marks, the club will be able to overcome these challenges to create an unforgettable experience.

“I hope that when the magazine actually gets printed, students — especially seniors — will enjoy having something tangible to remind us of this unprecedented time in isolation and have something we can make out of our year,” Lee said.