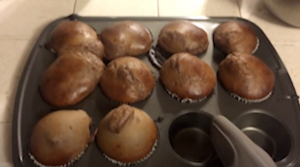 Name a more iconic group of 10

Permalink
Local sophomore becomes yet another victim to scientific progress.

Protein powder is a busy athlete’s best friend. When mixed with cold milk and shaken violently, a frothy, creamy and sweet shake forms. It conveniently delivers 25 grams of whey protein and can be quickly chugged down in seconds.

Being a drinkable liquid is one of the main selling points of protein shakes, as they are much easier to down than other sources of protein, like meat or legumes, which require chewing.

However, after drinking the same concoction four days a week after workouts for six months straight, the quick post-workout routine quickly became a chore, rather than the delicious treat it was at first. I even began thinking about ways to consume the highly concentrated protein in a different form.

Fortunately, the sweet taste of protein powder separates it from other sources of protein and unlocks many possibilities for unique recipes. I decided to make the foolhardy decision of baking my beloved protein powder into cupcakes, despite having zero baking experience.

A quick disclaimer from here on out: Viewer discretion is advised — especially if you enjoy baking — and please don’t judge me for what you’re about to read. You’ve been warned.

From the start, my lack of many crucial ingredients made my forage into the realm of baking an ill-fated escapade. The recipe I was following called for strange ingredients like apple cider vinegar, oat flour and applesauce. Ever desperate, I substituted the apple cider vinegar for normal white vinegar, the oat flour for all purpose flour and worst of all, used strawberry jam instead of applesauce.

The lower water content of the jam compared to applesauce created a viscous, subpar batter, which was a nightmare to pour into the cupcake tins.

My third mistake caused the biggest catastrophe of all. Because I put a relatively large amount of batter in each cupcake receptacle, I thought I needed to bake for longer than the 20 minutes the recipe recommended. This almost rendered the batch completely inedible. The low amount of water provided by the strawberry jam evaporated in no time, and for the rest of the baking time a tough crust developed on the surface of the cupcakes. The porous interiors suggested that the cupcakes once had a soft and fluffy texture, but in the end were bone-dry and more closely resembled the texture of an old crusty dish sponge.

Even eating the cupcakes was a challenge, because the overbaking caused the paper liner to completely fuse with the batter that was in contact with it. The paper had to be torn off bit by bit, which left the cupcake looking like it had been attacked by ants.

Eating the cupcakes felt like chewing cardboard. The only redeeming quality of the otherwise pathetic pastries was the flavor. I could still detect the sweetness of the chocolate protein powder and the strawberry jam. As the Greek philosopher Plato once said, “Necessity is the mother of invention”; I discovered that soaking the cupcakes in milk for a few minutes would soften them enough to be edible and also improve the flavor.

Nevertheless, I didn’t have the heart to feed this lamentable confection to anyone. After eating half of the ones I baked, I threw the rest away.

This regrettable series of events occurred due to a combination of hubris and boredom. I was so preoccupied with whether I could that I did not stop to consider whether I should. In the unlikely event that I decide to bake protein cupcakes again, I will try to follow the recipe exactly. In any case, I have learned my lesson in tampering with perfection.

And for all you sadists out there, I’ve uploaded the video of my process here.