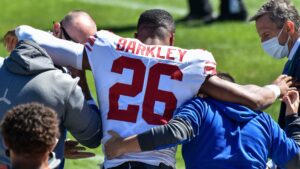 Superstar running back Saquon Barkley of the New York Giants is helped off the field after suffering an ACL tear.

With little under seven minutes left in the first quarter of the San Francisco 49ers’ Week 2 matchup against the New York Jets, star defensive lineman Nick Bosa stumbled to the ground in the middle of a pile of players. After being carted off the field, Bosa later announced that he had torn his ACL — and he would be unable to play another game this season.

The 2020-2021 NFL season began Sept. 10 amid much speculation from fans on how the league would fare during the COVID-19 pandemic. After lots of deliberation, the NFL decided to skip its yearly pre-season games and shorten the offseason, a decision that seems to have contributed to the unusually high injury count.

The lack of a pre-season clearly had an impact in Week 1 of the season, especially on kickers, who missed a total of 19 out of 68 field goals — the most in an opening week since 1982. Despite this, the week went smoothly overall, as there were no COVID-19 outbreaks and the number of injuries in the league remained relatively normal.

Week 2, however, was a different story. Many notable players suffered major injuries, including Carolina Panthers running back Christian McCaffrey (high ankle sprain)and New York Giants running back Saquon Barkley (torn ACL), both of whom are regarded by many to be the two best running backs in the league.

Another issue that could jeopardize the season is the concerning number of positive coronavirus tests popping up across the league. The Week 4 matchup between the Tennessee Titans and Pittsburgh Steelers was postponed following eight positive tests on Sept. 29 — a total of 22 Titans players and team personnel eventually tested positive for the coronavirus.

The NFL’s timeline of COVID-19 outbreaks mirrors that of Major League Baseball (MLB). The MLB’s Miami Marlins had a similar outbreak in July but eventually overcame it and resumed playing in August. The MLB season is still ongoing despite all the positive tests, so if the NFL continues to follow the MLB’s lead by keeping up daily testing and postponing games when necessary, the regular season could be completed without major hiccups.

The future of the NFL season is uncertain, but despite the excessive injuries and coronavirus concerns, millions of Americans are glad to have their favorite sport back — at least for the time being.