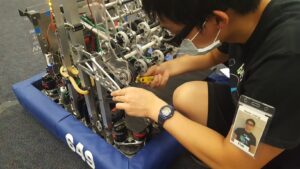 Photo by Saachi Jain
Junior Owen Liang mounts the new intake hardstop, preventing the intake from deploying too far down.

Permalink
The MSET Fish are making robot changes and adapting to the loss of recent graduates.

After a successful season for FIRST Robotics Competition (FRC) team MSET Fish 649 — where the team ended as division finalists at the FIRST World Championships in Houston — the team is now starting to prepare for their two upcoming offseason tournaments: Chezy Champs and Calgames.

The team is facing a lack of time before the first tournament, Chezy Champs, hosted by Bellarmine Prep between Sept. 23 and 25. There are only nine remaining two- to three-hour sessions before the team has to pack up and compete with the robot.

However, since construction over the summer limited access to the robot and new members need to be trained, the time frame to implement these changes is shorter than in previous years.

“This forces us to not only be more efficient and focus on the changes that will affect our performance the most, but also pick changes that are most feasible in the given time frame,” said junior Govind Buttar, the team’s software lead.

In preparation for the offseason tournaments, the software team is working on improving the autonomous routine, adapting to the new intake mechanism and adding a current limiting software, Buttar said.

He believes that optimizing their autonomous routine by “implementing  trajectories for the robot to follow using path generation and follower software” is critical to increasing the team’s consistency and overall score.

Additionally, a completely different approach to programming the intake mechanism is needed due to the change in intake hardware. A current limiting software routine is also needed to prevent the robot from getting stuck and the motors from overheating, which often causes the drivetrain ripping up the carpet.

In terms of hardware, the top two priorities are to redesign the hooks on the hang subsystem so they do not fall off and the ball intake.

“At the World Championships in Houston, we had a lot of issues with our hooks falling off the hangar bar, so redesigning the hooks will solve this issue,” said junior Naveed Kasnavi, the hardware lead.

Making the intake stronger will let the two drivers, Kasnavi and junior Owen Liang, be more aggressive during matches. It could also potentially make the robot more resistant to impacts from other robots, a common occurrence in FRC matches.

With a lot of work ahead of them, Kasnavi said the team is working hard to finish as much as they can in the short three week period.

“Personally, I want to win, but that is an unrealistic goal for the team,” he said. “The team’s goal should be that everything we set out to do works near flawlessly.”