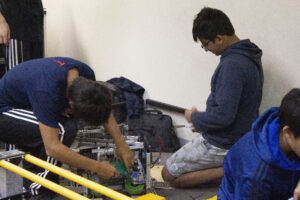 The school’s M-SET robotics program will be featured as an example of American education in a South Korean documentary that will air in the near future.

“They came to Silicon Valley to specifically talk about computer science and AI by filming and interviewing the robotics team,” M-SET president senior Mitra Mokhlesi said. “Seeing how we apply tech into our learning is one of the goals of the broadcast.”

The company plans to to do a feature on the extracurricular opportunities provided by Silicon Valley schools. The film will also cover high schoolers in Japan, Korea and Canada.

The company came by request of junior robotics member Jae Lee, who heard of the documentary team through his Korean volunteer organization, whose advisers had connections with the film team. Lee invited them to film and interview students on the robotics team.

“We talked about how high schools here lead students to learn more about a subject themselves and how compared to other countries, we’re free to do student-based learning,” Lee said.

This student-based learning is a stark contrast to Korea’s strict teacher-based education system, which has often been criticized by many Koreans and Americans alike.

According to Korean-American column writer Se-Woong Koo from The New York Times, “The world may look to South Korea as a model for education — its students rank among the best on international education tests — but the system’s dark side casts a long shadow. Dominated by cram schools and highly authoritarian teachers, South Korean education produces ranks of overachieving students who pay a stiff price in health and happiness.”

Lee said that since most of the learning in Korea was based solely on teacher instruction, the film team was looking to broaden the country’s horizons and introduce new approaches to education into its system by exposing the approaches taken by high schools in different countries.

The film centered around the collaborative process of the FRC (First Robotics Competition) team, the division of M-SET that Lee participates in.

FRC, in contrast to FTC (First Tech Challenge), focuses on developing large robots almost as tall as humans instead of smaller robots. According to Mokhlesi, FRC works in the season from January to April, and FRC is overall a much larger-scale competition, with more complex and completely custom robot development.

“I think they filmed robotics here to discuss and show how students are applying knowledge that they’re learning on their own into a competition,” Mokhlesi said. “They also interviewed mostly students who had taken AP Computer Science, and they asked these students what their experience was like collaborating in those classes.”

Besides Saratoga High, the filmmakers will also reach out to other high schools in Los Angeles and San Diego before traveling to other countries. If all filming proceeds according to schedule, Mokhlesi heard from the film crew that the film is set to broadcast in December.

“Since it is an educational broadcast, many students and their parents will be seeing this in South Korea,” Mokhlesi said. “Overall, I would say that this opportunity is extremely amazing.”