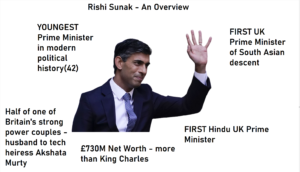 Permalink
Though seeing a fellow second-generation Indian become a leader of a world superpower initially warmed my heart, a further look at Sunak’s policies made me disillusioned.

After Boris Johnson messily resigned from the position on July 7 over a growing list of ethics scandals, former Foreign Secretary Liz Truss was next in line from the Conservative Party to take charge of the land across the pond.

Funnily, Truss defeated Sunak in an election that intended to establish the U.K.’s main leader for years to come. However, after making horrific policy moves, which resulted in record high inflation rates, Truss became the British public’s second-most disliked leader of all time, standing at a net favorability of -70%. Russia’s Vladimir Putin is the only world leader with a lower favorability rating, currently standing at -84%.

In particular, Truss’s drastic slashing of taxes sent the markets reeling, and the value of the British pound tanked. As a result of this country-wide economic downturn, she shamefully resigned from office on Oct. 20, six weeks after initially taking office. Her 45-day term was the shortest in the country’s history, and an election for the next leader of the U.K. ensued.

Enter Rishi Sunak, the winner of this game of musical chairs.

When I saw that he won, I was initially ecstatic. Most of the headlines around the victory read “Rishi Sunak becomes first South Asian Prime Minister,” or something along those lines. I couldn’t help but feel prideful, inspired that a fellow second-generation Indian made it on to the big time. He was going to become the leader of one of the world’s superpowers!

Curiosity led me to do my research on Sunak, however, and after digging further into his policies, I’ve changed my perspective on him.

The biggest thing I noticed after just a few minutes of digging was the glaringly regressive nature of his policies. During his time as chancellor, he spent hundreds of millions of pounds toward the pushing of anti-immigration policies.

As a second generation immigrant himself, the son of a modest Indian couple, he came to the U.K. with a lot less money than the hundreds of millions he has now. That made me question what his intentions were. I concluded that after gaining this astronomical wealth, his sole intention is to consolidate it. His ventures, along with the money that his father made through consulting giant Infosys, were his means of getting even richer.

Ironically, Sunak’s policies essentially prevent someone from ascending in the way he did. He is reducing chances for immigrants to break into the traditionally non-diverse politics sphere while being the son of an immigrant himself.

To me, his desires to cut public spending reek of naivety and ignorance. With a 700 million pound net worth, Sunak likely will be unaffected by the compressed money in the economy. On the other hand, the middle class, representing the majority of the U.K., will be hurt.

And Sunak seems not to care. He famously said that he “didn’t have working-class friends,” and on another instance proudly announced depriving the large urban areas of necessary funds. With the urban areas of the U.K. heavily composed of people of color like himself, Sunak seems to be cutting hands from those who metaphorically fed him.

During his time as an integral part of Boris Johnson’s cabinet, Sunak pushed forward some of the most racist policies in recent history, particularly through his attempt to put the Nationality and Borders Bill into action. If this law had passed, the British government would have the right to revoke the citizenship of anyone it claimed had ties to another nationality.

This is abhorrent. It seems like Sunak doesn’t want anyone who looks like him to take the path he managed to take. What’s worse is that Sunak persistently reiterated his desire to implement a variety of anti-immigration laws even after taking the nation’s top leadership position. Migrants being forcibly accommodated on dingy ships is an appalling law in itself, but those seeking sanctuary in the U.K. forcibly being shipped off to Rwanda is disgusting.

These laws demonstrate that Sunak cares little for anything but his own advancement and wealth. With his harshness and lack of concern toward immigrants, Rishi Sunak is not someone to admire.