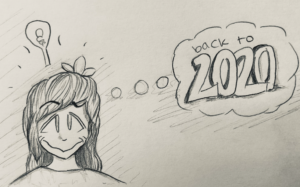 March 13, 2020, started out like any other day. Waking up after a restless six hours of sleep (which I sheepishly admit was a record low for my freshman year), I gobbled down a couple of pancakes, chugged a glass of milk, stuffed my track uniform into the bottom of my backpack and grabbed two extra bottles of water. Then, I made a mental note to be extra early for the day’s track meet after repeated lectures of “Don’t be late!” from track coaches Archie and Tippetts.

Despite the apparent normalcy of my morning, I could not wipe away the uneasiness that had plagued me for weeks.

While much of the U.S. ignored the severity of COVID-19, my family had the inside scoop from constant communication with relatives in China who were already living with the virus.

I already knew from multiple conversations that the virus was no joke, and almost all of my relatives were under a mandate to stay inside. This was not a suggestive “health officials advise you to stay indoors” kind of mandate, like the ones later issued here, but a literal “there are police officers standing on the exits of near-empty highways questioning each car” kind of mandate.

A few days earlier, my aunt said that security was so tight in China that my uncle would have been denied entry into their small community after coming back from a business trip, had she not been there.

With those cheery thoughts lingering in my head, I left home for school and tried to maintain the “everything is fine, we’re in the U.S.” mindset.

When I entered Mr. Rector’s class for first-period English, my classmates were already speculating about potential school closure, but I didn’t pay much attention to the chatter. Rather, I was trying not to fall asleep after staying up until midnight or being “that-kid” who interjected COVID-19 jokes by pointing out the virus’s severity.

Though I still cringed internally every time I heard a fake cough or a “you have Corona!” declaration, I understood where people were coming from, as most people didn’t have much background information about the severity of the crisis. Even I, who communicated with primary sources in China, had a hard time wrapping my head around the severity of COVID-19.

After English ended, an unpleasant memory popped into my head during my walk to third-period Geography. About this exact moment on a Friday just a few weeks earlier, someone had started a rumor that I had the coronavirus because I somehow “traveled to China” in the few morning hours I was absent the previous day. After repeated questioning about my supposed whereabouts and a lengthy reassurance of “I promise I did not go to China in the span of six hours,” I finally entered the geography classroom half-amused and half-confused.

Still, what I hope was meant as a harmless joke-rumor hit home more than my classmates knew. In fact, I had traveled to my parents’ hometown in China during December break before the virus was made known to the public, and I dreaded the thought of a real, potentially harmful rumor emerging.

After grabbing a quick lunch and heading to my fifth-period class, I realized that I had forgotten to email my math teacher about leaving early for my track meet. Fearing my teacher’s wrath (although it was more of my being embarrassed), I decided to sit the class out until 2:08 p.m., despite the fact that track runners were supposed to change and meet by 2 p.m. My promise to not be late was not starting out on a good note.

Once the bell rang, I threw my math sheets, pencils and miscellaneous crumpled up papers into my backpack and sprinted out the classroom with the zipper half open, while an intense flurry of “uh oh’s” drummed relentlessly in my head.

“Dang it,” I remember muttering to myself as I sprinted past the hordes of students gathering in the hallways, hoping that nothing would fall out of my brimming backpack. Yet mid-run, I was stopped by the loudspeaker in the hallways saying, “Today’s track meet is canceled,” followed by a fellow friend of mine yelling “I think school is canceled” as she ran up to me in her track uniform.

That statement took me a few long seconds to register.

“What?! Wait, you have got to be kidding me. Are you sure?” I recall asking as I threw my backpack on the floor and began cleaning up the mishmash of school supplies I created a few minutes earlier.

It didn’t take long for me to realize that my track season wasn’t the only part of my life that would be put on hold.

Not only was my track meet canceled, but my orchestra practice was also canceled a week later, meaning no more weekly Friday rehearsals at city hall where my friends and I got to explore the intricacies of the city facilities during breaks. Two weeks later, the flute competition I spent the past year preparing for was wiped from my calendar, as well as my family’s spring break Cancun trip that we had been meticulously planning for a year.

Despite my disappointment, I knew that I was relatively lucky. That month, I heard from my mom that one of her friends’ daughters from China had to call off her trip to L.A. after her speech tournament was canceled. While she originally planned on moving to and attending college in the U.S. before COVID-19, she graduated a few years earlier and started her undergraduate studies in China instead, due to health concerns and the overall chaos in the U.S. Two of my friends from Fremont who, unlike me, excelled in sports (particularly badminton), had their practices and competitions altered to an at-home format or canceled completely, ruining what could have been a spike in their athletic careers.

My cousin, an international student who was just about to finish his master’s degree at Oregon University, planned on finding a job and settling down in the U.S. But after the shutdown, he decided to go back home to Xi’an, China, where things were considerably less chaotic.  If  he had stayed in the U.S., he would have to quickly find a job during a recession or risk having his student visa revoked and getting deported.

As I look back at all that began on March 13, I can’t help but be grateful that everyone I know seems to have made it through the pandemic OK (though that is far from true for all my classmates, some of whom have lost grandparents and others to the disease). As we approach vaccination season and (hopefully) a return to normal later in 2021, I know that March 13, 2020, will be a day I’ll never forget.