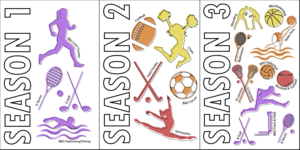 Photo by  Graphic by Christina Chang

Junior Marcus Kuo recalls when he and his friends cheered each other on at a high school swim meet in his freshman year. After the meet, they went to eat dinner at Top Cafe together.

Those are the happy memories of a normal year of athletics, the opposite of what the 2020-2021 school year has brought.

When the pandemic began, school sports ended last spring and remained largely shut down until this February. Kuo, who typically participates in both water polo and swim in a normal year, was among the dozens of athletes thrilled to be back on campus and competing again.

“A lot of my club water polo teammates were doing practices with their high school water polo and swim teams, so I felt like I was missing out on that time to improve,” Kuo said.

Student athletes get a chance to play

The Santa Clara Valley Athletic League Board of Managers (SCVAL) recently approved a sports calendar, which divides sports into three seasons, each with two weeks of preseason and six weeks of competition.

The schedule has assigned all sports to go along with the California COVID-19 tiers, and as counties hit certain colors at the start of each sports season, the respective sports will be allowed to begin. This schedule follows the guidance used throughout the state of California, and has been set by the California Department of Public Health (CDPH).

Season 1 began on Feb. 1, and its competition season is scheduled to run from Feb. 15 to March 26. The Season 1 sports include boys’ and girls’ cross country and swimming, girls’ golf and girls’ tennis. With sports starting again, students notice a positive change in both their athletics and academics.

“The reopening of sports has definitely positively affected me,” Kuo said. “I'm largely relieved since the absence of sports has been pretty stressful in terms of college recruiting. I also feel more productive with daily practices and am able to concentrate better on schoolwork afterwards.”

For Season 2, practices start March 1, with competition season running March 15 to April 23. Depending on the county’s color tier on March 29, some Season 2 sports may be canceled.

The CDPH updated its guidelines on Feb. 19, and they took  effect on Feb. 26. These updates will allow the return of Season 2 sports including field hockey, boys’ and girls’ soccer and football, while the indoor sports badminton and girls’ volleyball will be moved to Season 3.

“I was extremely happy when I found out we were playing; we’ve been practicing since last August and [we’re] finally going to be put to the test,” senior varsity football quarterback Grant Petters said. “Being my senior season, this is my most important year. I’m really looking forward to playing the game I love with this team I've been bonding with for the past four years.”

Season 3 sports practices are scheduled to begin on April 5, and competition season will occur April 19 to May 28.

In addition to outdoor sports, according to an article published by the Mercury News on March 5, indoor sports will be allowed in counties with adjusted case rates below 14 per 100,000, the result of a lawsuit filed by two high school senior football players in San Diego. Although it allows the return of indoor sports statewide, it is up to each county and school district whether they would like to opt out. As of March 12, Santa Clara County and the school district have not said anything regarding this possibility.

Because of the unusual circumstances of this school year due to COVID-19, athletic director Tim Lugo hopes student athletes will get a chance to play their sports to provide a sense of normalcy.

Although details of the settlement are still being finalized, sports personnel anticipate that masks will be required for all participants on the bench, but will not be required during games, and up to four spectators per player will be permitted in the audience.

However, because the updated guidelines have not been sent out by the CDPH, Lugo said he cannot comment on the requirements the school will need to follow.

“I'm happy [indoor sport athletes] may get a season but honestly, I need to read the guidance before I can comment further,” Lugo said. “I don't know what is expected of the athletes, coaches or the school yet.”

Despite the return of outdoor sports and the possible return of indoor sports, SCVAL will forgo any CCS or CIF playoffs this year and not have any postseason play.

“I’m disappointed that we’re not having playoffs because those are the reasons we play those 10 games,” Petters said. “It’s the light at the end of the tunnel that we strive for the whole season, and without that, there may be less motivation from the players to perform at their best.”

He said he was especially disappointed because he felt that the team had a good chance of performing well at CCS this year.

Senior Jane Loo, a player on the girls’ golf team who has played the sport for seven years, said she was happy to be able to hang out with her golf teammates and see people again. Although she is glad to be back, she said she agrees with the decision to forgo playoffs this year.

“I just want to have fun,” Loo said. “I look back and I miss playing high school golf, and it’s really sad it’s my last year. [But] I’m not disappointed that they chose to forgo the playoffs because I understand there’s too much risk, and personally, I think they made the right choice.”

All sports have generally seen a decrease in participation, mainly due to the changing rules and parents not comfortable with their children returning, Lugo said. Specifically, swift changes with the club and cohort rules have led to uncertainty for many athletes.

The school earlier announced that students could not play for a club team while playing for their high school team this year.  However, according to an update sent out on March 5, this rule has now been waived, although the high school team must take precedent. With the county moving from the purple tier into the red tier, the one-cohort rule has also been changed. Whereas students could originally only be part of one school extracurricular cohort, they can now participate in two cohorts: one high school sport and one extracurricular cohort like robotics, drama or Bombay in the Bay.

Sophomore Martin Xu, who participates in swim and robotics in a typical year, was forced to choose between the two this year because of the previous one-cohort rule and the reconstructed seasons which moved swim, a traditional spring sport, to Season 1. In the end, he chose robotics because he made the commitment at the beginning of the school year and the robotics team was already suffering from lack of in-person participation.

Xu said it was frustrating when the school announced that students can now participate in two cohorts, as he wishes he could’ve done both.

“I wanted to compete in robotics competitions while also participating in swim [because] I don’t know if I will have time next year [as a junior].”

Despite the frustrations, Xu said the constantly changing guidelines are good, as he interprets it as a sign that COVID-19 cases are decreasing.

The registration process to participate in sports this year is also different due to COVID-19, as the school is not doing the “ticket to play,” which students normally receive for sports clearance in a normal school year. This year, parents will have to upload their child’s physical examination results to Athletic Clearance, and Lugo will then view and clear students for sports.

“There’s really no way for us to do the ‘ticket to play,’ so we decided early on that if we did sports, we were just going to clear everyone virtually and not bring any paperwork into the office,” he said.

Sophomore Sihan Ma, who is also on the swim team, said although she is cautious about COVID-19, she noted that the safety regulations have also posed challenges of their own.

“I'm nervous about trying to make friends when everyone is one lane apart and focused on recuperating between drill sets,” Ma said. “There's barely any chance for small talk and it's very awkward.”

Despite her worries, she is glad practices have begun because although they are tiring, she has noticed an improvement in both her physical and mental health.

“I haven't been exercising consistently without swimming available, so the reopening of sports gives me a breath of relief,” Ma said. “I can finally have some temporary incentive to stay healthy. It’s tiring, but my mental health is a lot better.”