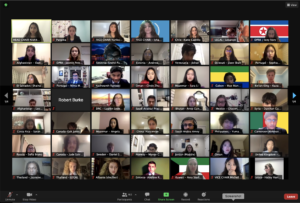 My dysfunctional brain (after what was likely 3 hours of sleep the night before and a couple too many coffees in the morning) chose the Democratic People’s Republic of Korea (DPRK) as my country assignment for the Stanford Model UN Conference without considering how in the world I was supposed to represent North Korea in the Economic and Financial Committee (ECOFIN) and discuss the Latin American economy.

For some context, Model UN is an activity in which students roleplay different countries in a simulation of the United Nations. Given that, DPRK is possibly the worst country assignment ever, because discussing world issues and reaching compromises with a hundred other aggressive high school students is hard enough without representing the Hermit Kingdom that neither cares about the world nor deigns to compromise.

In retrospect, I chose North Korea in a childish fit of irrational vengeance after giving up the assignment of my dreams: China in the United Nations Security Council (UNSC). Call me a nerd, but I was drooling over that veto power! Luckily for me, the ordeal was only going to get more childish.

The Stanford conference took place during that time in November when I was thoroughly exhausted from school and dying for Thanksgiving to arrive. With little motivation to prepare ahead of time, I ended up procrastinating until a few hours before the first committee session to write my opening speech.

The bulk of my preparation involved meticulously consulting a guide to representing North Korea in Model UN. It outlines sample attacks (“Reckless military confrontation racket of the Yankees”), alternative titles for the Supreme Leader (“Guiding Sun Ray”) and resolution ideas (every cosmetics company must have a portrait of Kim Jong-un as the perfect incarnation of a human being to guide their product development).

I found myself actually enjoying this preposterous charade, and to be honest, I’d take this nonsense over actually researching economics any day.

A few hours later, the conference began with the standard formalities (which, these days, meant greeting each other with “Uh, you’re muted”). When the chair eventually gave me the floor, I “proudly” raised a print-out portrait of the Ever-Victorious and Iron-Willed Commander to my computer camera. I learned this trick from the Model UN community’s urban legend of a North Korea delegation that cradled a framed portrait of the Glorious Leader throughout an entire conference.

My speech began with an extravagant quote from the Invincible and Triumphant General, and I made sure that any actual information was buried in the flourishes of DPRK-speak.

“We sit here today to discuss the hyperinflation and recession that have been rampant in Latin America, but if you look toward North Korea, our people are happy,” I declared with finality. “The difference? The economies of Latin American countries are poisoned by the loathsome notion of capitalism and the hideous influences of the West.”

As for my proposed solution to the economic crisis, I asserted that Latin American countries should order all citizens to adopt one of North Korea’s 28 state-mandated haircuts, accentuating my point by holding up a picture of the aforementioned haircuts for my committee to see. Sorry, I just couldn’t resist the temptation.

Somewhere in my speech I did mention the actual proposal (tighter control on economies), but hey, I had to keep my priorities straight.

Turns out, the horrendous assignment became a somewhat fond memory, a warmth I revisited when I sat in front of my computer in the cold and dark mornings of January to attend the Yale conference as the U.A.E. For that assignment, I actually researched and put in serious effort — a.k.a., what little effort I could give when I was roused at 5:30 a.m. every day thanks to the abominable invention of Eastern Time.

Then, in the merry month of February, I pored over hundreds of pages of international law written decades ago in an attempt to research the topic of diplomatic protection — a result of my masochistic choice to represent Panama in the Legal Committee. Some irrational part of me wished that I could once again have the absurdity of North Korean rhetoric to cover for my lack of research, but seeing that was impossible, I decided to spend an hour writing this story rather than wringing out the three-page single-spaced (seriously Chair, single-spaced?) position paper that was due in 24 hours.

Just when I thought Model UN couldn't be any crazier than representing DPRK, I was introduced to crisis committees, in which I can pass secret directives to assassinate fellow delegates. How does that work? I haven’t the faintest, but if I can enjoy pumping up North Korea, I suspect I’m capable of just about anything.