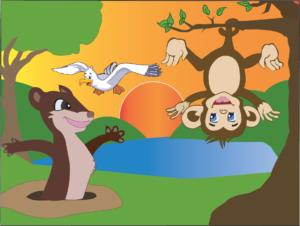 Photo by Graphic by Anjali Pai

Do not mess with the inhabitants of the Discord Pets Channel.

If someone were to observe the newspaper staff during remote learning, they would know that much of the class’s activities occur over Discord voice channels. Sure, there are channels dedicated to the editors-in-chief (EICs), section editors and adviser Michael Tyler, but one channel undeniably stands superior to the others.

Originally created to broadcast EIC senior Allison Hartley’s golden retriever Merlin to his large fan base consisting of just about everyone on the staff, the channel has now been conveniently taken over by three particularly chatty “pets” every class period: Anjali the Monkey, Carolyn the Seagull and Christina the Weasel. However, the history of our “Pet” nicknames began long before that voice channel.

In middle school, Anjali was known for doing competitive gymnastics, which was associated with monkeys, and thus the nickname Monkey was born. Carolyn, who moved to Saratoga in seventh grade, made friends by tricking people into looking in random directions by pointing in the air and saying “Look! There’s a seagull!”, hence earning her the nickname Seagull. Christina earned the nickname Weasel as a roast for being short (in reality she’s 5 feet 2 inches, which is extremely tall for a weasel).

Our unlikely trio began in the murky depths of seventh-period P.E. class, and we originally bonded over card games, which we all had no clue how to play. After two years of crunching leaves in the fall, avoiding worms that flooded the school campus during heavy rains in the winter, being disgusted by fuzzy caterpillars in the trees in the spring and failing to follow through with planned Great America trips in the summer, we became closer than ever.

Then came freshman year, when we all took Journalism 1. By then, we were known for randomly hollering each other’s pet nicknames across the school hallways and classrooms, thoroughly confusing people on campus. During tutorial, we would either find ourselves in English teacher Erick Rector’s classroom or the Journalism Room, studying for endless biology exams or negligently procrastinating over inverted-pyramid worksheets.

Now, however, the pandemic has hindered our ability to convene in-person, so we have resorted to alternatives, including the taking-over of the Discord “Pets” channel during period 4 newspaper. It was like fate — the heavens (or unknowing EICs) had dedicated a Pets voice room specifically for us to tell inside jokes, make wishes at 11:11 am and brag about having a “Pets” story to accompany our “Pets” channel.

Even though we’re usually friendly, don’t mess with us or steal our voice channel. If you do, we will (quite literally) attack from the sky, the ground, and the trees, although an exception may be made for Merlin the dog, the original keeper of The Pets channel.