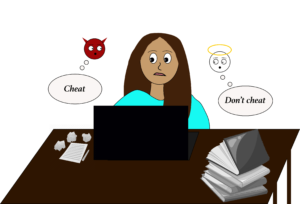 Editor’s note: Nick, Marie and Barry are pseudonyms used to protect the identities of three students interviewed for this story.

As Nick, a sophomore, logs into his second-period math class, he braces himself for the test he has that day. Despite knowing the test is strictly closed-notes, he pulls out his notes and phone and places them to the side of his desk, outside the periphery of his camera — but close enough that he can still see them.

After finishing the questions on his test, Nick begins checking his work. When he reaches an unfamiliar problem, Nick searches for similar problems in his notes and enters it into Symbolab, an online equation solver, to find the correct answer.

Academic dishonesty has always been an arms race between teachers and students like Nick, but since transitioning into remote learning, many more students have chances to cheat.

According to a Stanford University survey, 73 percent of all test takers, including graduate students and teachers, believe  that most students have cheated at some point in their academic career. Eighty six percent of the high schoolers surveyed agreed.

Use of websites such as Chegg, Course Hero and other online academic tools that provide online tutors, test answers and other academic aid during assessments have skyrocketed after the start of the pandemic.

According to a Washington Post article, North Carolina State University found that after the transition to remote learning, over 200 out of 800 students in a single Statistic 311 class were referred for disciplinary action for using Chegg or other online resources.

Many other schools have faced similar battles against cheating. As a result, teachers have pushed back with new policies to combat this issue.

History teacher Jerry Sheehy has required students to follow a strict set of procedures before and during the test to minimize the risks of cheating. For example, he requires students to unmute during the test so he can hear if anyone is talking to others and prohibits students from leaving the Canvas quiz page.

“We want our assessments to truly assess what the students are learning,” Sheehy said. “Just because cheating is easy doesn't mean it's right.”

For subjects such as math, some teachers have introduced strict testing policies when taking a test, such as making students clear off and show their workspaces before and during a test.

Even with these altered strategies to assess students, Nick still finds ways to cheat. He starts a call with his friends and shares his screen of the test so they can help him find answers online. This way, he never leaves the Canvas window that tracks how long students navigate away from the quiz screen.

Although Nick is aware of the potential repercussions of his actions, he still feels pressured by both his peers and parents to do well on tests.

“It’s very hard to hear that your friends are doing better than you on a test,” Nick said. “Even though I’m happy for them, I still want to know that I can do just as well or even better than them. My parents don't know that I cheat, so they expect me to get good grades, which makes [cheating] even more tempting.”

Nick is not the only student with this mindset. A research paper by Jeizelle Fernandez of Far Eastern University, concluded that many students believe they can obtain high grades through cheating.

In the study, Fernandez also noted that when parents see false positive results due to cheating, they tend to set higher standards each time, which leads their children to feel high levels of pressure.

“Over my years at Saratoga, I’ve noticed an increasing trend of students being more concerned with the end results than the process,” he said.

Marie, a junior, has also admitted to cheating because she said she has poor study skills that make it harder for her to learn the material. She, along with other students that struggle with test performance, has lower expectations of success and ends up cheating to satisfy the higher expectations of others.

According to Carnegie Mellon University, students are more likely to cheat or plagiarize if the assessment is high-stakes or if they have low expectations of success due to perceived lack of ability or test anxiety.

Marie said that she has tried to be honest during remote tests, but the stress and anxiety of receiving low grades and disappointing others is always at the back of her head. Because of this, she will continue to “use her resources” to help her throughout remote learning assessments.

Because they know that they can only do so much to mitigate cheating, many teachers have slightly lowered the weight of tests and quizzes on students’ overall grade.

Chemistry Honors teacher Kathy Nakamatsu, for example, has decreased her tests from 40 to 50 points to only 20 to 30 points and decreased the weight of the tests by 10 percent.

By making participation grades higher and replacing tests with projects and essays, teachers have tried to decrease students’ incentives to cheat.

Despite teachers’ intentions, some students still succumb to the urge to cheat because of how easy it is online. Nick said that even a lot of his friends have started cheating on tests because of how effortless cheating now is.

“Even with the added restrictions, I can still take out my phone and search up the answer to a question in seconds or search through my notes,” Nick said. “I can even ask my friends for help. It’s very hard to resist the temptation [to be honest] because of how easy [cheating] has become.”

Barry, a sophomore, also admits to cheating on tests using different methods. Instead of using external websites or programs, he often asks his friends to send him pictures of or general information about the exam since most of his test-heavy periods are on Blue Days.

“I don’t think I’ve ever gone into a Blue Day class without knowing some of the content on the test,” Barry said. “Most of the time, the type of questions don’t change between periods; it’s just the numbers or wording that the teacher alters, which makes it easy for me to get a head start.”

While teachers are aware that scenarios like this are common among their classes, they hope that students will learn to be honest and break these bad habits. Sheehy urged students to think about the consequences and their moral integrity before making these decisions.