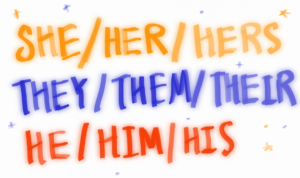 When freshman Sage Szenda changed their pronouns from she/her to the nonbinary they/them roughly a year ago, they felt a sense of comfort in a way they had never experienced before.

In the past few decades, society has come to an increasingly sophisticated understanding of gender and gender identity, especially among the young. A May 2021 survey from Pew Research found that members of Gen Z are most likely out of all the generations to know someone who uses gender-neutral pronouns such as “they/them,” and a 2019 CDC survey found that almost two percent of high school students identify as transgender. A recent 2021 survey from the Trevor Project found that one in four LGBTQ+ youth identified as nonbinary.

Three students in this group interviewed by The Falcon said that they have found generally welcoming experiences from their peers and in the school environment as a whole, facing few to no instances of discrimination. Here are their stories.

At elementary school birthday parties, Szenda wondered why they preferred playing in the mud with the boys and didn’t enjoy playing with Barbies or picking flowers with girls. Szenda knew that there were hints from the beginning that they were nonbinary, but they didn’t see it quite yet.

Szenda first learned about being nonbinary and they/them pronouns online.

“I had a friend who was nonbinary back in summer of 2020, and when I heard about their pronouns I got confused, and that was what led to me researching them,” Szenda said. “I knew about the term ‘transgender,’ but I didn’t know that there were more than two genders initially.”

Going by she/they pronouns at the time, they soon realized that using more masculine and non-binary pronouns made them feel more happy, comfortable and safe. Szenda said they then came to the conclusion that they might be nonbinary or fall under the transgender umbrella.

Since changing their pronouns, Szenda has been much more confident than before, especially after having a short haircut that reflects their identity and changing their name.

In addition, since they began going by new pronouns, Szenda was able to overcome parts of their past they had struggled with before.

“I used to suffer from anxiety in middle school and a lot of body dysphoria and just not feeling like myself,” Szenda said. “I’m so much more comfortable and confident about myself as a whole.”

Generally, Szenda said friends and family have accepted them and that they have a great support system to rely on. After coming out to their friends, they eased themselves into telling their parents.

“I told a majority of my friends first because I wasn’t sure how my parents would react, but I actually found out my mom is a demigirl as well and uses she/they pronouns,” Szenda said. “I’m extremely grateful for having such supportive parents.”

Reactions haven’t always been supportive. A classmate that they used to talk to frequently on Discord would call Szenda slurs and often invalidated Szenda’s nonbinary identity.

“I’ve had problems with this person in the past as well,” Szenda said. “He was saying that I wasn’t valid and that being nonbinary wasn’t valid, and he was using slurs against transgender and gay people.”

Thankfully, Szenda was able to tell a trusted adult who was able to deal with the situation.

“Being transgender and nonbinary is not something you choose, you’re born with it; it’s almost like race in a way, and you can’t change your race or else you’ll be miserable,” Szenda said. “So people may not accept us, but we can’t change the way we are.”

As Pham logged onto their Discord server in November 2020, they noticed that many of their online friends were addressing them as “he,” assuming Pham to be a boy because of their microphone audio. Pham soon found a liking to these pronouns, which sparked them to dig deeper into issues of gender identity.

“[Spending some time online] is where I found myself liking this ‘alternate version’ of me more,” Pham said. “It was really a catalyst for realizing my gender identity later on.”

Pham’s pronouns are currently he/she/they, and they first changed them last year. The feeling of wanting to change their pronouns developed over the last year and a half over quarantine, where they were alone and could think without interference for a long time.

Feeling more comfortable with pronouns other than she/her, Pham decided that he/she/they pronouns better represented who they were.

Since they’ve changed their pronouns, Pham said that it’s generally gone unnoticed, though willful ignorance and refusal to use their preferred pronouns, from those who do know, is a huge hardship for them.

“I never really get past these hardships because I don’t have the time nor energy to crack down on people,” Pham said. “I just swerve.”

To those that choose to be ignorant whether against their “will” or not, Pham said that people should “go Google” the difference between gender and sex.

At the end of the day, Pham said that they are just going to keep going forward feeling like the best version of themselves.

Freshman Jay Louie first learned about the concept of being nonbinary in seventh grade. They had already known about the terms gay and transgender, but they began to delve more into the nonbinary label after first hearing it.

“I just kind of felt like I didn’t like being the gender I was and was really uncomfortable,” Louie said. “I figured out what nonbinary was and figured that that was what I was.”

Louie said they did not have a specific moment when they immediately realized they were nonbinary. They first changed their pronouns around September 2020 to they/them, but slightly altered them to they/he around two months ago.

They said that they feel comfortable being addressed by both, and don’t mind which one is used to address them as long as others are being respectful.

After Louie’s transition, they said they felt more positive changes with their body and identity.

While the majority of people in Louie’s life were supportive, they did face some challenges during their coming out process. Louie said that one of their grandparents had difficulty grasping the concept of nonbinary labels and told Louie “you are what you’re born to be.”

“I took coming out slow,” Louie said. “I started with who I live with and then worked my way to my grandparents and they’re figuring out how it works.”

Louie said that they understand the changes that the people in their life felt as well, such as when they had to convince their parents to get them a binder and a haircut. However, overall Louie said their transition has been relatively smooth.