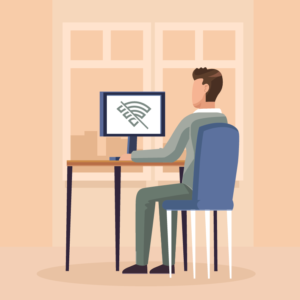 When sophomore Sarah Frederick woke up on Thursday, Oct. 22, to find that her internet went out, she fell into a state of what she called “natural panic.”

“It was already past the time class was supposed to start, but I had no way of logging on,” Frederick said. “I wasn't surprised because it has happened many times before but it's still always really stressful.”

Much of Saratoga experienced a Comcast internet outage beginning early that morning, with power being restored at 10:40 a.m.  According to an email sent by the Saratoga Union Elementary District, a squirrel shorted a transformer causing a high voltage line in the area to break.

As the internet went out on a Thursday morning, it disrupted students’ ability to attend their first- and third-period classes.

For some students, the internet outage caused many difficulties. To attend her classes, Frederick had to drive to Pete’s Coffee to get internet access.

“It was really weird for me to be doing school in the middle of peoples' coffee runs and background conversations, but I guess it's better than having to miss all of my classes,” Frederick said.

This followed a similar incident which occurred a month before, on Sept. 23, when many Saratoga residents, including Saratoga High, were affected by an internet outage.

Frederick encountered a similar situation during this previous event, where she did her homework using her phone’s hotspot while her mom was driving.

“[If this were to happen again], I would probably be annoyed because it causes such a disruption to the normal routine I've finally established,” Frederick said.

Sophomore Petr Tupitsyn was also affected by both occurrences, and said he initially felt scared about his school work. Both times, Tupitsyn had to connect to his classes using data and his phone.

Though the outages didn’t have a great impact on his ability to connect to classes, Tupitsyn said it was bothersome. “I would certainly feel annoyed and frustrated that this keeps happening,” Tupitsyn said. “I guess I wouldn’t mind too much if it got me out of my tutoring sessions though.”

Some students also went to the school library, student center, and quad to regain internet access and join classes.

For Biology and Chemistry teacher Cheryl Lenz, the outage created extra work. She said her initial reaction was “Not again!” but she was relieved there were no tests or quizzes scheduled for those days. Though she could make adjustments to the lesson plans if needed, it would have been more difficult.

Because many students were absent or came late, Lenz had to make sure the Canvas agenda had information and directions for students who couldn’t attend. Since students can make up work when the internet comes back up, Lenz didn’t have any concerns for their ability to complete the assignments.

Though many students and staff had negative experiences with these events, World History teacher Michael Betz, who was on campus at the time of the first outage, said it actually helped his productivity. For Betz, the outage resulted in the opportunity to get more work done and even watch a documentary.

“Without the internet, you felt this great sense of loss, but I was able to adapt and get everything I needed done before I left at 2:30 p.m. that day,” Betz said.

With the unpredictability of COVID and widespread fires, many have been prepared for this type of situation.

“If this were to happen years before, I’d be pulling out my hair,” Betz said. “But now I’m comfortable with it because I know I can be productive. It was just another obstacle to overcome.”