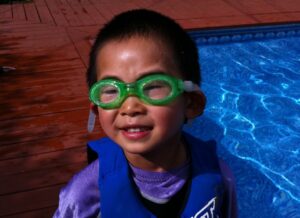 Photo by Jonny Luo
I first started learning to swim in the small pool in my backyard.

Permalink
From trying tennis to playing soccer, a sophomore recounts his unathletic childhood.

When I was growing up, I never pictured myself pursuing an athletic career or participating in team sports; yet here I am, 10 years later, just having finished a great swim season.

Now, I know I’m likely not going to have an illustrious career ahead of me as a professional athlete. Despite that, I want to share some memorable experiences playing sports throughout my life.

Unlike many other children, my childhood consisted of little-to-no exposure to sports. Instead of watching NFL games every Sunday night, my parents and I would go for a walk in the neighborhood or head out to eat. In fact, I didn’t even know the rules of football until I learned about them in sixth-grade P.E., and even then, my knowledge was limited due to the highly condensed curriculum.

Also, as a child, I was too afraid to even catch a ball if someone tossed one at me. Sometimes, my brother, who’s four years older than me, would try to get me to play catch, but everytime he did, I would shy away and end up getting hit.

It’s hardly a surprise that when we played football in school, I was the person who was always picked last. Sure, I could sprint decently fast, but I couldn’t catch a football to save my life. I still remember my P.E. teacher telling me to “make my fingers into a triangle” and that doing so would make it “easy” for me to catch the ball, but I just couldn’t do it. I was that one kid who stayed on the edge of the field and prayed that the quarterback wouldn’t notice me — and if they were smart, they didn’t.

When I was in third grade, my brother introduced me to tennis, which he had been playing for a few months. One day during his practice, my mom dragged me along for a private lesson with my brother’s coach. She told me that it would be “fun” and that I would “learn to love tennis,” but I detested every minute of it.

During that torturous 2-hour lesson, I stood around while my brother actually learned how to play. My mom had bought me my own little tennis racket, but to this day, it is still gathering dust somewhere in the garage.

After my mom realized I would probably never, ever pick up a tennis racket again, she decided to enroll me in the American Youth Soccer Organization (AYSO).

Before my first practice, my mom bought me everything I needed: cleats, a bright-green soccer ball, shin pads and the classic knee-length socks all soccer players seem to wear. We practiced thrice a week at Saratoga Elementary, and played games at Redwood Middle School.

One problem for me was that I didn’t have any friends on the team. Since soccer requires teamwork and camaraderie, I fared poorly.

I ran awkwardly along the sides of the field hoping no one would pass the ball to me. My teammates probably didn’t even know I was there half the time, and I never scored a goal throughout my six-month soccer career.

Although my mom signed up to be a soccer mom, she hated driving me to practice and getting up early to attend games, so she was probably glad when I quit soccer.

School swim made me love sports

Prior to joining the SHS swim team in spring 2021 as a freshman, I had been swimming with De Anza Cupertino Aquatics (DACA) for close to four years, and at Saratoga Star Aquatics for a few years before then.

Despite my experience in swimming, I was no Michael Phelps. I swam relatively slowly for my age, so most swimmers in my practices — who are split based on speed — were a few years younger than me, making it harder to connect with them. Much like with AYSO, I had no friends I could talk to, which made practices extremely boring.

Additionally, the coaches recommended showing up to at least four of the five weekly practices, but I usually only showed up to two or three because I was too lazy. I also didn’t really like swimming, so after DACA closed due to the pandemic, I never started swimming again until high school.

In my freshman year I joined the swim team for one main reason: I didn’t like P.E. Realistically, how much fun can you have lifting backpacks full of textbooks in your room at 8:30 in the morning? So, because I had prior experience with swimming, I joined the SHS swim team.

Coming from a private middle school, I didn’t have too many friends on the swim team, and due to the pandemic, there were only two swimmers per lane. Each swimmer was also confined to a little “box” where they could stand on the pool deck that was marked with chalk and regularly sprayed down with bleach or chlorine. As a result, you could only socialize with one or two teammates, removing one of the best aspects of being on the team.

Swim practices were, once again, boring for me, and swim meets were all virtual, so you only swam with other SHS students. And, since I knew few people on the swim team, long swim meets were tedious and socially awkward.

However, this experience drastically changed during my sophomore year.

Being able to talk face-to-face with other people — unlike last year — also benefited my swimming. For example, once during practice, someone on the team gave me little bits of advice on how to improve my backstroke and freestyle strokes, which wouldn’t have been possible if we were still swimming alone like last year.

Although practice being moved from after school to 4 p.m. due to the broken pool pump was a large inconvenience, I actually preferred the salt-water pool to the chlorine one at our school; it left my skin less irritated and didn’t bleach my hair whatsoever.

Additionally, swim meets were something I actually looked forward to. Previously, with the virtual swim meet format, there was no competitive aspect to swimming, nor was there anyone to cheer you on.

With the resumption of in-person meets, I have been able to travel to other schools, benefit from a competitive atmosphere and have friends cheer me on during races.

Writing this just a week after the swim season ended, I can see how this positive experience with high school sports reversed a whole childhood’s worth of negative feelings about athletics.