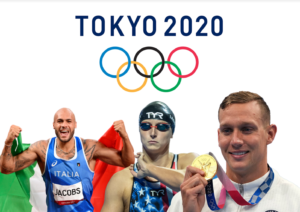 Permalink
For the third consecutive year, the American Olympic team takes home the most gold medals.

After a one-year delay due to COVID-19, the 2020 Olympics began on July 25 and concluded on Aug. 8. Spectators weren’t permitted to attend due to pandemic regulations; however, fans still cheered on their favorite athletes’ accomplishments from afar.

Baseball, softball and karate, which will not appear in the 2024 Olympics, were added this year due to their popularity in Japan, as the Olympic Committee now allows host countries to propose added sports. The Olympics heralded nine new mixed-gender events in seven sports, which were popular with both athletes and gender equality advocates.

This lack of chemistry was especially prominent in the beginning when the men’s team lost two of their three exhibition games to Nigeria and France, having only had four days of practice together before their first game against Nigeria. In addition, many NBA players elected not to play for their country, unlike international NBA superstars like Luka Doncic and Rudy Gobert. Toward the end, however, the Kevin Durant-led team was able to come together to take home the gold over a fiesty French squad led by Gobert.

Considering  her success at the 2016 Rio Summer Olympics, earning four golds and one bronze, Simone Biles has been a household name and Team USA’s model for women’s gymnastics for the past four years. At Tokyo, Biles once again headlined the Olympics. This time, however, it wasn’t because of her accomplishments, but rather for her controversial decision to withdraw from the Olympics due to “twisties” a condition of disassociation that prevents gymnasts from completing a skill.

Her decision elicited mixed reactions, with some people showing overwhelming support and admiration for her transparency, along with understanding her need to place mental and physical health above winning medals. However, some called her a “national embarrassment” and criticized her for pulling out of the Olympics.

Biles’ supporters shared their own experience dealing with mental health and sports, often citing Jacoby Miles, a former gymnast, who also experienced the same condition and fell on her neck during a practice session, which left her paralyzed from the chest down at 15.

Unlike the success of the other USA teams, the aging two-time defending FIFA World Cup USA soccer team did not live up to expectations this year, losing to Canada 1-0 in the semi-final round and winning the bronze medal. The team should’ve increased playing time for younger players as older members of the team were slow in adjusting to the coaching style of new coach Vlatko Adonvski, which showed during their Olympic run.

Aside from Team USA’s Olympic dominance, athletes from other countries also showcased impressive talent and skill, including a number of young athletes, none bigger than Quan Hongchan, a 14-year-old Chinese diver, who was just barely old enough to qualify. She took the world by surprise with her three dives — two perfect dives and one close to perfect — culminating in a record-breaking performance. Hongchan has  a bright Olympic career ahead, and she is ready to dominate this event in future years.

Moving on from water-related sports, track and field is undoubtedly one of the most popular events — and with Usain Bolt’s retirement following his 8-year Olympic career, the track and field events were more unpredictable than ever. Italy’s Lamont Marcell Jacobs took home the men’s 100-meter gold, a first for Italy, as well as the 4×100-meter relay, shocking casual sports fans and setting fire to the internet. There is no doubt that many fans are looking forward to his return in the Paris Olympic games.

For the majority of the Olympics, the USA and China were neck-and-neck in the gold medal race, ultimately ending with Team USA winning by one gold medal with the Women’s Volleyball Gold Medal win over Brazil on the last days of the Olympics. Ultimately, The Olympics this year did not disappoint, and the one-year postponement did not detract from the numerous stunning athletic performances.

The next Olympics will be held in 2024 in Paris, with big names such as Dressel and Ledecky returning and more great performances within reach.