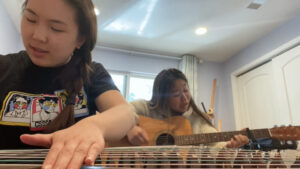 On March 15, 2020, Selina Chen and Anouk Yeh composed a short duet with Guzheng and Guitar as accompaniment to mourn an unsatisfying end to the anticipated speech and debate season.

“Friday the 13th indeed” was my first thought when the news broke last year on March 13 that school was closing.

I remember wanting to wear a mask to school that day; in fact, I had been wanting to do so for weeks. But I was too scared to wear one because, well, long story — the world didn’t just come crashing down on March 13; rather, it began spinning out of control for Chinese Americans long before the lockdown.

January and February were usually my busiest time of the year because I play the Guzheng, a traditional Chinese harp, and performances are always on high demand around Chinese New Year.

In 2020, however, every concert I practiced for was canceled, even as early as mid-January. Back then, most Chinese Americans were much more careful about the virus than any other ethnicity, perhaps because we were most connected to and informed of the situation in Wuhan.

On Jan. 22, my mother went to swear her Oath of Citizenship, officially making her, my brother and me U.S. citizens. I was so excited that I didn’t pay much attention when she told me a few East Asian-looking people wore masks at the gathering, and that she felt nervous sitting next to one of them.

The day after, I laid in bed while reading a New York Times article on Wuhan’s lockdown. A group of my Chinese immigrant friends tried to get me to join their project to help send masks — a necessity in shortage — to Wuhan. We thought we were above the fray and danger would stay at bay.

How American of us.

A few days later on Jan. 26, I competed at a speech and debate tournament at Milpitas High School where I opted to wear a mask out of caution because hundreds of students and parents — many of whom could have traveled to China recently — were cramped in a cafeteria. My behavior was so novel that a Falcon article reported on it; what the article did not mention was that at the tournament, a teammate saw my mask and called out, “Corona!”

She meant it as a joke, and I laughed because everyone else found it funny, so why wouldn’t it be?

The same joke was made throughout the day, and somehow the nickname stuck for weeks within my team. At one point, when a friend tried to call me “Sel,” a nickname I despised, I told him dryly that I prefered “Corona.” I would later wonder if my remark signaled my submission to and internalization of a label I did not deserve.

The article also didn’t mention that a fellow competitor came up to me and asked, “do you have the coronavirus?” I stared at her incredulously; if I had the virus, why would I be competing instead of being warded up in a hospital? It struck me then: The American public was wildly uninformed.

It was later that I learned about America’s initial response to the bubonic plague outbreak in San Francisco Chinatown in 1900. Many white people during the time had thought that the plague was an Asian problem alone and that a barbed wire fence that locked down Chinatown could stop its spread. They thought themselves invincible.

A century later, nothing has changed, with the nation responding to the pandemic with carelessness, as if washing hands can solve it all. I pondered if the initial ignorance was a choice fueled by the American sense of invincibility: We are the strongest nation on Earth and therefore could not be brought down by a virus from the “Sick Man of Asia.” I wouldn’t know; I was only four days into this being-an-American business.

I abandoned wearing a mask after that one tournament after seeing how people made the assumption that a mask equals coronavirus. It was not an assumption I could afford when attacks were mounting on people who looked like me.

Two weeks later, a brief fight broke out in the speech and debate email chain: One parent wanted to verify that no competitors from China would be attending the Stanford Invitational while another parent accused him of racism.

At the tournament, coach Erick Rector casually told our team to sit outside instead of the hotel lobby because “there’s less Corona.” I felt relieved that I wouldn’t have to make the choice between sitting with my friends and staying in relative safety.

It was still only early February, but my family was hearing a lot from friends and family in China, so the few cases in the Bay Area felt like a big deal — who could have believed that American ears would soon grow too calloused to care about millions of cases?

Scared of wearing masks because of public pressure, my family and I protected ourselves in other ways. At a tournament on March 1, I simply refrained from stepping inside the crowded cafeteria. My mother began to reheat every food item we bought from outside, and I was not allowed to buy anything from the school cafeteria.

Fast forward to March 13, everything from the previous weeks culminated on one chaotic day.

I woke up in a haze, having slept only five hours each night of that week because I was recruiting a group of high school volunteers to gather data on school closures for a coronavirus-tracking website — yes, sites for such purposes were rare back then.

English 10 with Mr. Granoff was my favorite class (no offense, yearbook, you come next), but the classroom felt strange, as if the fluorescents were too pale. My friend stayed home; her desk was eerily empty.

Then came Chemistry Honors with Mrs. Nakamatsu. Students were milling about, supposedly doing homework, but getting nothing done because of the uncertainty hanging above our heads. When councilmember Rishi Kumar posted on Facebook that the school would be closing, I only felt a sense of relief: It was a beacon of certainty amid a week of turmoil.

I found myself hungry at lunch because of my mom’s no-outside-food rule. My friend group’s sanctuary, Ms. Fan’s room, was buzzing with frightened energy in that period between the initial leak and the district’s formal email announcement of the school’s closure.

I remember a friend exclaimed excitedly that we could go shopping, only to stop herself mid-sentence upon realizing that lockdown meant no shopping malls.

After lunch, my final period was yearbook. The fate of the publication was uncertain, but we took precautions days before to transfer files online and prioritize tasks that had to be done in-person. I naively believed that we could go back to school by the end of the semester because, if China was already getting the virus under control, why couldn’t the U.S. do so as well? SARS worked out just fine in 2004, didn’t it?

Looking back, I couldn’t have been more wrong.

That evening was rather blurry, likely a result of my sleep deprivation-induced headache (junior-year-me would shrug it off). I remember my iPhone’s insistent vibration alerting me of the county’s lockdown orders and the banners piling up on my home screen. At some point that evening, I wrote a diary entry:

“So school is finally cancelled. Speech season is ruined. YCAS, Scholastics, and TEDx are postponed.”

I don’t want to dwell on how pessimistic I sounded. I can only think about whether I spelled “cancelled” correctly (I didn’t) and whether I should remove the Oxford comma from a direct quotation of text (ugh, AP style).

The thing is, the lockdown marked the beginning of my feeling safe. I no longer needed to suppress every urge to cough or forgo a mask I desperately wanted to wear, lest people assume I was infected. I no longer had to wrestle between protecting my safety and protecting others’ mistaken sensibilities.

March 13 was also the day I received my U.S. passport in the mail. My red booklet with a golden “People’s Republic of China” was replaced by a blue one with a silver eagle. But after everything I experienced leading up to the day, my new citizenship felt like a foreign skin I couldn’t quite fit in because my appearance made life in America so much more complicated than it should be.

As a writer, I feel the need to introspect and decipher what was happening, but I’ve accepted that the beginning of 2020 was a tangled mess of yarn tied together by a knot: March 13.