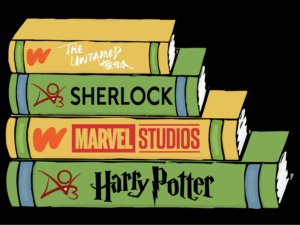 While I had always been marginally aware of the existence of fanfiction, it felt as elusive as the deeper meaning behind Mr. Yim’s calculus lectures. That is, until I came across fanfiction while working on a research paper last year, and the glimpse of this fascinating community spurred me to make explorations.

For a Stanford class I took in my sophomore year on contemporary China, I wrote my final research paper on the Chinese media’s prohibition and commodification of homosexuality. It included a case study on the scandal involving “Untamed,” a Chinese breakout drama aired in the summer of 2019 that gained immense fame for its actors, specifically Xiao Zhan.

Blaming Xiao for the website’s shutdown, AO3 users launched a boycott of the products he endorsed and the TV series itself, resulting in low ratings. Brands such as Estée Lauder deleted their promotional materials featuring Xiao, whose viral status and flawless public image were ruined.

I was shocked by the sheer number of users who could be so outraged at losing the ability to read fanfiction, so I decided to find out what exactly was so enticing about this genre.

A quick Google search yielded Wattpad as a platform for fanfiction, and its beautiful website design lured me in. I typed in the first fandom that came to mind — Harry Potter — and set out to skim a few stories.

A few days in, I came to a rather unflattering verdict: Wattpad’s contents do not live up to its UX (user experience) team’s efforts. Although a few stories have genuinely good writing, many more are juvenile attempts written by elementary schoolers or the equivalent — cute, but far from what I’d like to read.

Worse, most of the stories had racy content that made me stop reading immediately (and wouldn’t be appropriate to publish in The Falcon). Seriously, what happened to having actual plots?

I decided to try out AO3, despite its subpar website design that looks akin to the first generation of Internet Explorer.

Soon, I discovered that AO3 is an absolute goldmine if, and only if, one uses the “Sort and Filter” functions properly. By weeding out certain ratings and categories, I avoided the “Contents that Must Not Be Named,” allowing myself to explore stories without grimacing.

Next, I learned to have the system sort the works by “Kudos,” which are essentially “Likes” anyone can leave on the stories they enjoyed. This way, the stories that show up on top are the ones readers truly love. I was pleasantly surprised by the excellent writing — by my amateur judgement, some AO3 works are neck-to-neck with published novels.

My favorite discovery was AO3’s ability to filter by word limits. Because reading fanfiction is solely meant for relaxation, I didn’t want to get hooked by million-word-long books that were overly time-consuming on a school night. Instead, if I wanted a quick story to fill in the short break between classes, I entered a range of 1,000-2,000 words. If I just had an upsetting experience or got undesirable results at a speech tournament, I’d choose the 10,000-20,000 limit and give myself an hour to get over any negative emotions.

As I got more comfortable with AO3 and the fanfiction jargon — like “AU,” “drabble” or “one-shot” — I learned to add tags like “Humor” and cross out tags of things I don’t want to read. I know that on principle I shouldn’t be only reading what fits my liking — I follow Fox News on Instagram for the exact purpose of listening to the “other side” — but I think I can be excused with something as trivial as fanfiction.

Aside from Harry Potter, I’ve read from fandoms like Marvel and Sherlock Holmes — popular movies or shows I didn’t love because of certain elitist or flat characters to whom I couldn’t relate. In fanfiction, however, such characters are given rounded backstories and arcs that sometimes exceed the original.

My favorite work thus far is a 228,000-word book, “Life in Reverse” by Lise that I indulged in over summer — insanely long, I know, but totally worth it. The work imagined an alternative universe in which Marvel character Loki falls to Earth post-“Thor” and finds a home in SHIELD. Unlike many other Loki-centric fanfictions, this Loki’s villainous identity isn’t erased with a rushed and far-fetched redemption; rather, he slowly reckons with guilt and kindness, influenced by the humans around him. Under Lise’s pen, the trickster god becomes a morally-ambiguous but relatable character who struggles with internalized racism and, in a memorable scene, seeks the help of a therapist upon experiencing suicidal thoughts.

Beyond the works themselves, AO3 harbors a vibrant writing community. Within the “comments” section, countless users leave constructive critiques on the author’s characterization. Occasionally, a writer shares their personal struggles and readers respond with words of encouragement. With anonymity and without the burden of publication, writers are free to explore unconventional styles, resulting in innovative storytelling techniques that have opened my eyes to new writing possibilities.

Although fanfiction has been a constant companion to help me relax in stressful times, it simply does not have the same literary value as most books published by professional printing presses. However, I was inspired to write about my experience after a conversation with my friend, who marveled at how confidently I admit I read fanfiction. Further inquiries made me realize that people often view fanfiction in a tainted light because it’s oversimplified to the “Content that Must Not be Named” and nothing else.

But reading fanfiction shouldn’t be something to be ashamed of. Sure, if you read the said content, then please kindly keep that hush-hush, thank you very much. But if you just want a light-hearted story to cheer you up, then I’d say fanfiction is one of the best guilty-pleasures to have.

We’re all familiar with the comparison of a good book to a best friend. Fanfiction isn’t exactly like a best friend, but I’d say it’s like a friendly face in your calculus class that understands your suffering; spending time with them a couple times a week always brings a smile to your face.