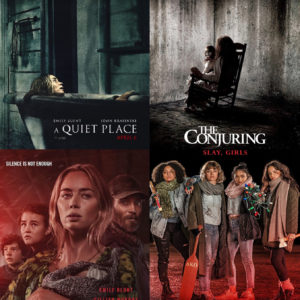 Four mainstream horror movies that left a lasting impression on me.

Permalink
‘A Quiet Place’ and ‘The Conjuring’ deserve the critical praise they’ve received.

The screen goes pitch black, matching the darkness of the theater, and the silence is so jarring one could hear a pin drop. Then, a deafening roar makes the hair on my neck stand, and a life-size doll with a knife in hand lurches at me through the screen. My shrieks of terror bounce off the walls of the movie theater.

Some movie-watchers thrive on these experiences of blood-curdling adrenaline, but not me. I’ve only ever sat through one complete horror movie in my entire life. Innumerable times, I’ve endured about 20 minutes before sprinting out of a friend’s living room feeling either overwhelmed with horror or revolted by an idiotic plot. But do not underestimate the number of key insights that those 20 minutes can tell me.

Here I present my expert opinion, outshining Rotten Tomatoes by miles, on four of the most mainstream horror films ranked first to worst.

If anyone thought a movie consisting almost entirely of silence would not work as horror, John Krasinski, who directed and acted in “A Quiet Place,” proved them absolutely wrong.

In a world where sound provokes enormous underground creatures to pop out and elicit deadly strikes, the Abbott family, consisting of a father, mother, their deaf daughter and their younger son, embark on a journey to seek refuge and find a way to fight the monsters back. Just one fate-determining challenge: being silent the entire time.

If I were a director and knew a movie revolving around the concept of silence would turn out this masterfully, I’d make all my movies with purely diegetic sound. The extreme feeling of suspense that the silence creates, accompanied with engaging visuals on screen, deftly communicates the story and keeps viewers engrossed.

Furthermore, the cast is filled with talented stars who act powerfully: Krasinski, Emily Blunt, Noah Jupe and — most outstanding of all — deaf actress Millicent Simmons, who deftly played a deaf character in the movie.

As I watched the movie, I was so intrigued by the plot that I forgot I was watching a horror movie. Instead of intentionally incorporating a lame abundance of jump-scares, as if to scream at the audience — “Hey! You asked for horror, and we delivered!” — “A Quiet Place” only bases horror aspects, such as grotesque visuals and violence, around its strong plot. Needless to say, I ended up actually finishing the movie.

Its apprehension-inducing plot and strong visual contrast, thanks to clever screenplay, make “The Conjuring” an overall strong contributor to the genre. In some specific scenes, because of the warm lighting, I genuinely forgot I was viewing a scary film. Similar to “A Quiet Place,” horror aspects revolve around the plot, instead of vice versa, which was a pleasure to see.

However, the buildup to the climax felt 20 years long. You know there’s something wrong the instant you get the urge to fast-forward. Why is the same closet door creaking open for the fifth time? Is something actually going to happen this time? I found myself pondering repeatedly.

A basic failed sequel. Following the awe-inspiring work of “A Quiet Place,” the prospect of a sequel was announced. People’s hopes were inevitably too high. The movie followed the path of so many other sequels: It fell far short of the original.

Although director Krasinski didn’t fail to maintain the suspense factor that made “A Quiet Place I” shine, the sequel still neglected to provide an interesting resolution to the family finding control over the noise-attacking creatures that haunted them their entire lives.

Throughout the movie, conflicts and moments of fear are extremely superficial because the plot is so predictable. Oh no, the deaf daughter almost couldn’t get across the river to defeat the creature? Guess what, we know she has to survive and succeed because her family would decease otherwise and the movie wouldn’t have a resolution.

If I was an official movie critic (on second thought, I actually am), I would categorize “Black Christmas” as a comedy instead of as horror. The movie showcases 1.5 hours of a flimsy, misogynistic plot revolving around a college girl who spends the entire film literally walking headfirst into the most obvious signs of danger. She feels threatened by the antagonists — buck-toothed frat boys who believe they are almighty by dressing like vampires and executing fake voodoo magic.

Poker-face acting is another delight, as well as a myriad of plot holes that are foolish to the point of being entertaining; I believe you should experience them for yourself instead of me spoiling them here.

Horror movies are a risky hit-or-miss; I always say the poorest ones are interchangeably horror and comedy. It is easy for a horror film to cater to the singular goal of scaring the living daylights out of audience members; as a result, films often fall significantly short in key movie aspects such as plotline, acting and overarching message. But no matter where they fall on the spectrum from best to worst, most horror films occupy a spot in your memory long after you finish watching them, even if it’s for only the first 20 minutes.