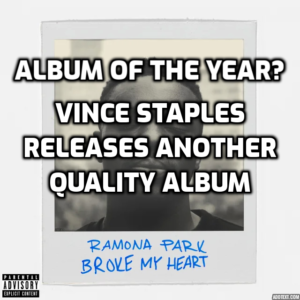 album
Hip-hop artist Vince Staples continues his run of consistency with one of his strongest projects yet.

With his 2015 album “Summertime ‘06,” Long Beach rapper Vince Staples established himself as one of the best West Coast artists of the decade. After two relatively short extended plays (EPs) with 2018’s “FM!” and 2021’s “Vince Staples,” Staples announced his return in 2022 with “Ramona Park Broke My Heart,” a full 41-minute album.

The album’s title references the Ramona Park neighborhood in Long Beach where Staples grew up. Throughout the album, he describes how his experiences in the neighborhood shaped his identity and views on subjects such as romance and loyalty. For example, in “East Point Prayer,” Staples describes how he was forced to move to Atlanta due to some trouble in Ramona Park.

The album starts out strong with a solid intro in “The Beach,” and its calming vibe perfectly sets the tone for the rest of the album. While listeners who desire more aggressive beats similar to those of “Summertime ‘06” might be disappointed, the production on “Ramona Park Broke My Heart” is perfect for the story Staples tells, sounding exactly like a sunny day in California.

While the track “Magic” with West Coast heavyweight DJ Mustard is one of the best standalone tracks on the album, its slightly more mainstream sound makes it feel out of place in the context of the whole album, which is characterized by a more melancholic style. “Lemonade,” with Ty Dolla $ign, is also catchy, but suffers from a similar problem. Nevertheless, these two are a welcome change of pace among more somber tracks like “When Sparks Fly.” The other high-profile collaboration on this album is with superstar Lil Baby. Despite some skepticism, Baby delivers a near-perfect feature on “East Point Prayer.”

“When Sparks Fly” is the standout song of the album and one of the most vulnerable in Staples’ career so far. Staples puts his own spin to the hip-hop concept of telling the story from the perspective of a gun. This concept sounds fresh due to cleverly incorporated double meanings of words such as “rounds” and “shot” that make the song’s lyrics applicable to both a gun and a relationship partner.

The second half of the album, while not as strong as the first, is still an enjoyable listen. “Papercuts” has arguably the best beat in the album, and “Player Ways” showcases Staples detailing his regrets. Both of these tracks stand out because Staples embraces his more vulnerable side, something he consistently does better than others in the same lane.

With “Ramona Park Broke My Heart,” Staples has not only released a strong contender for album of the year, but has cemented himself as one of the premier rappers in the modern music scene — even if he is sometimes disregarded in the mainstream.