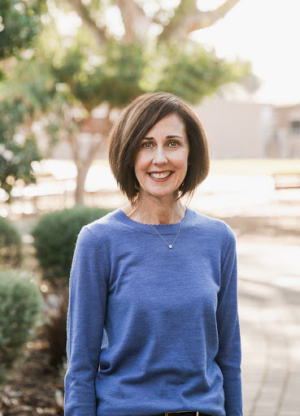 Editors’ note: Farrell’s responses during an interview with The Falcon have been lightly edited for clarity and brevity.

In recent months, district leaders decided to hire an experienced Title IX Coordinator to enact policies and procedures that Los Gatos and Saratoga High adhere to when investigating claims into student-on-student sexual harassment under the law, which prohibits sex-based discrimination at federally funded institutions. The new coordinator, Megan Farrell, will also develop and deliver training on equity as it pertains to Title IX investigations. Farrell began her first day of work on Dec. 1.

According to assistant principal Kerry Mohnike, Farrell will oversee the school’s compliance efforts with Title IX along with other responsibilities for the district.

First enacted in 1972, Title IX requires all federally funded educational facilities to not deny students access to educational opportunities based on their gender, including admission, athletics, financial aid, and student services and counseling. It also maintains that schools hold the responsibility to prevent sex-based discrimination — including sexual harassment — and must promptly and effectively respond to harassment when such incidents occur.

Farrell worked as the Title IX Coordinator at the Palo Alto Unified School District (PAUSD) from 2017 to 2019, though she has been working in this field since the late 1990s and has specifically been focused on equity matters since 2009.

Farrell’s career began at United Educators, an insurer of higher education in K-12 districts, where she helped tackle reports of student-on-student sexual harassment. She later moved to University of Maryland, where she handled student matters, including Title IX, and discrimination and harrassment with employees. After years spent in New England, Farrell moved to California in 2014 to work at a law firm in San Francisco until she joined PAUSD. Farrell holds a law degree from Widener University in Delaware, and a master’s degree in business administration from the University of Maryland.

During her two years spent at PAUSD, Farrell built the district’s Title IX protocol from ground-up, trained administrators and handled complaints, including during the investigation of a male Palo Alto student accused of three separate incidents of sexual assault in 2017, before moving to a part-time position. Once LGSUHSD’s Human Resources team heard of Farrell’s work at PAUSD, they asked her to join the district.

Q: What does your role look like at the district level? School level?

Right now, a majority of what I’m doing is about process and working with staff, establishing what I am, what I do for the district and what kind of resource I can be for everyone.

Currently, we have a policy that is being reviewed, since all of our policies in the district have to follow the California Ed Code. The California Schoolboard issues a policy to us and we take the meat of that and make little tweaks that make sense for the district. The biggest change here is that the Title IX regulations changed in August, and that is a whole new process for how investigations are conducted. Besides that, I’m also working with Heath Rocha, the chief officer of student services, on the student training regarding sexual harassment and trying to figure out what needs to be done for that.

Q: Are there any plans for student training right now? If so, what might it look like?

There are a few pieces of training currently being offered during the advisory period, so that’s the first step. We are also currently looking into trainers in Title IX specific training they could do for the students. I’ve done training for students but I also know that sometimes expertise from external places could be helpful, so we’re looking at those options as well.

I would be open to ideas because I know, depending on what year you are in school, me talking to you about Title IX might not be the most effective way to get the message across. I like to think I’m young, but I’m not, I’m just one more adult telling you what to do.

Q: Could you expand a bit on how the district goes about investigating a claim?

We usually learn about it informally: an incident bubbles up to a teacher or a coach, so we follow up with the individual, and contact their parents if they’re under the age of 18, and ask if they would like to file a formal complaint. There are jurisdictional issues since the new regulations made it very difficult to look into incidents that don’t happen during an education program or activity. Sometimes the person impacted doesn’t want to file a formal complaint, so then the Title IX coordinator weighs whether we need to proceed with this investigation.

If we start an investigation, it is really a matter of interviews, so sitting down and talking to the teens involved or any witnesses. Also seeing if there’s any digital records, text messages, direct messages on social media or — God forbid — photos. I wouldn’t look at photos I wasn’t required to look at, but sometimes there’s photos from a party or another event that we have to review. All that is taken into account, and we decide whether our policies have been violated or not, and if they have, then the discipline comes in.

Q: As the coordinator for the district, are you going to be the one making those decisions, such as proceeding with an investigation?

I would do that in collaboration with the district. If we were at a point where we had to decide whether to conduct an investigation or not, we would work together on that decision.

The new rules make it very clear that we shouldn’t go against the wishes of the victim, so I always try to collaborate with someone on that decision since we have to consider the facts we know and what are the pros and cons of going forward versus not.

One thing I can’t do as the Title IX coordinator is deciding whether the policy has been violated. I could be involved in disciplinary action, but those decisions are usually made at the school site level because they want to keep things specific to how they discipline for similar behaviors.

Q: With the recent changes to Title IX, what can the district investigate?

Under the new regulations there’s a jurisdictional requirement that the incident has to have been at school in an education program or activity at the school. Previously, it didn’t have to be on campus, say, a sports team is at another school, or students are participating in an after-school activity like a robotics competition that’s happening somewhere else. So we could certainly have jurisdiction over that, but the new rules are pretty strict around when you can investigate.

For example, if something happened on Saturday night at Student A’s house and that’s the only incident we have, we can’t investigate it. What we can do though if something happened at Student A’s house and Student B was the person who said something happened to her, we could provide her support at school to make sure Student A isn’t interacting with anyone that she’ll have a problem with so she can continue her education. We can put those measures in place, but we just can’t investigate that offsite campus activity. It’s a mandatory dismissal; it’s not a discretionary one.

Q: What can the school do to help the student if they can’t investigate the offsite activity?

What we would investigate then is the school culture piece of it: Are you being harassed at school, do you feel uncomfortable coming into class and why is that, are the friends of the person that did something to make life hard for you here, all of that.

One of the things I always contemplate is, if there’s a real, traumatic event that happened away from school and we can’t punish for it, I’m not really sure we want to retraumatize people in the investigation process so we hear all the details. We want to know what’s happening at school — what can we do to continue to support you in your education program?

Q: What are your goals for the community?

Based upon what happened this summer — as far as the public event that @fromsurvivorsforsurvivors had — I feel like the school’s a little bit in emotional turmoil. I want to get the policies and procedures in place, but I also want to work toward helping the community heal as well. I think a lot of people support what that group wants to do and that we could do a better job of bringing the community back together so people feel like we’re moving forward.