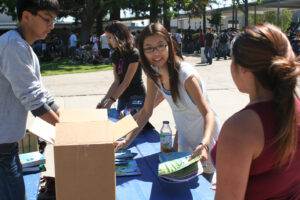 Few students outside of the journalism world understand the work, effort and creativity that that is needed to publish a piece of work, much less a 32-page quarterly, full color magazine. The process is made even more difficult if one is not trained in the skills needed for a journalist. However, senior T.T. Tu did not let this stand in his way as he embarked on creating a self-published “Bay Magazine” over the summer.

Few students outside of the journalism world understand the work, effort and creativity that that is needed to publish a piece of work, much less a 32-page quarterly, full color magazine. The process is made even more difficult if one is not trained in the skills needed for a journalist. However, senior T.T. Tu did not let this stand in his way as he embarked on creating a self-published “Bay Magazine” over the summer.

“I was relatively new to the journalism world, so I had to learn to use [Adobe] InDesign and get used to all that journalism jargon,” said Tu. “I kind of learned the process as I went along.”

Tu and his team of ten Saratoga seniors were able to complete the magazine over the summer and have distributed the free magazine to businesses across the Bay Area, as well as on the Saratoga High campus.

The first issue for fall 2008 features an article on the presidential candidates’ stances on environmental issues, restaurant reviews, a chocolate chip cookie recipe and a fashion spread. Colorful glossy pages showcase the effort Tu spent this summer organizing his own magazine.

First, Tu assembled a team of people who he knew he could trust and work well with, most of them already involved in Journalism. Then, he, along with seniors Christina Lim, Kathy Koo, Sonali Dujari, Michael Huang, Neyha Bhat, Lyka Sethi, Kelsey Dang, Tiffany Wang, Jonathan Vu, and Mabel Hsu, began to think of themes for the magazine and collaborate about possible story ideas.

For the first issue, they decided to “go green,” with articles on solar energy, electric cars, the pros and cons of paper bags vs. plastic bags and tips for eco-friendly living.

“I thought that going green was an important issue in the Bay Area,” said Tu, “and I thought that teens should be more aware of these environmental problems.”

After deciding on a theme, Tu took steps to start the magazine, including applying for a business license and creating a post office box and bank account. They also had to apply for grants and funding from organizations such as the City of Monte Sereno and the Rotary Club. The magazine also managed to get one ad from Willow Street.

“We weren’t intimidated at all for putting this magazine together because T.T. was a great leader,” said Mabel Hsu, the Think Editor for the magazine. “He was on top of everything and made the process very easy on all of us.”

The magazine was assembled with Tu’s personal equipment at home, using Adobe Photoshop and InDesign, as well as Illustrator. For inspiration, they looked to magazines they found interesting, like “San Francisco,” “Nylon,” and “Tokion.”

“We liked the modern-ness of them, and how they were simple yet sleek,” and Tu, “but I definitely think we have a signature look not like any of those magazines.”

Over the course of two and a half months, the team assembled a magazine from scratch, with the actual creation of the magazine taking three to four weeks.

“One of the hardest parts was getting everyone together, just because it was summer and everyone was traveling,” said Tu.

Another hard part was finding funding for the project.

“People were always so skeptical about teen projects,” said Tu, “so it took a little more time to convince them that this was a good project.”

Now, they plan to look for more members to continue the magazine as the majority of the staff is composed of graduating seniors. Tu wants “it to go as long as possible,” but realizes it would be hard to continue to mediate next year in college.

Currently the staff is working on the second issue, due out before Christmas.

Furthermore, Tu’s experience in publishing the magazine has led him to realize his passion for journalism, something he could not address as his schedule did not accommodate it.

“I don’t really know how ‘real’ journalism is,” said Tu. “But I would definitely like to work for a college newspaper.”