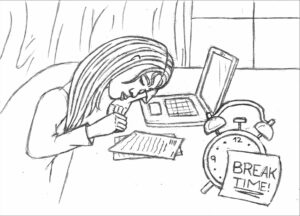 Instead of winding down from a month and a half of tireless schoolwork and extracurriculars, many students use their Spring Break as a time to catch up on schoolwork, study for finals and AP tests and apply for summer programs or jobs — essentially working nonstop.

Yes, breaks are a time to catch up, but it’s also important to use them for their intended purpose: breaking the routine from the rest of your life.

Students here are too often unhealthily engaged in a black-and-white school mentality with no middle ground for flexibility. For example, they believe they will either get an A or an F (read: anything below an A). Either get into a prestigious university or attend community college. This implies that students must be productive at all times to achieve their goals, when in reality, striking a balance between work and rest is critical to attaining success.

Academic pressure has become so ingrained in school culture that many feel the need to surpass their peers. Students overload on AP courses and extracurriculars with the main purpose of creating gleaming college résumes. Burnout often becomes the norm.

This is especially true of second semester, where after five months of school, students suffer another few months frantically preparing for AP exams on top of finals and organizing plans for summer break (which ironically is far from a break, usually packed with programs and internships for many students).

After four to six hours of school, students typically wade through several hours of homework, not to mention fitting in their extracurriculars. For student athletes, that means another two hours of practice every day. With the constant workload, numerous upperclassmen sleep past 1 a.m, according to a Facebook poll conducted by the Falcon in early February. This cycle repeats every day.

Even during the weekends, many students have back-to-back extracurriculars in addition to homework, resulting in minimal time for relaxation. It’s no wonder that so many students suffer from burnout. A Stanford University study on workplace productivity found that you can work and work nonstop, but only to a certain extent — past that threshold, you lose productivity.

One of the root causes for the lack of breaks when working is that it may seem counterintuitive to productivity. However, many studies show that taking breaks is beneficial in many ways, from reducing stress to increasing memory retention.

According to a 2011 study at the University of Illinois Urbana-Champaign, taking breaks while performing long tasks, such as studying for finals, enhances focus and productivity.

There are an array of techniques that can be used to split up work and break time. One of the most popular methods for doing dreaded tasks is the pomodoro technique: 25-minute increments of work are followed by five minutes of break, and after four pomodoros, a longer 15 to 30 minute break is taken.

However, it’s not only about taking breaks; it’s about taking purposeful breaks. For example, instead of scrolling through social media — which results in plummeting mental efficiency — breaks must be utilized effectively to re-energize. Cornell University suggests strolling outside, taking 15-minute power naps, stretching, listening to music or talking with friends.

In a school where students feel immense pressure to work nonstop, it’s important to remember that taking a break does not make you a bad student. So, my dear SHS community, take a break: Not only will you catch up on much-needed time for yourself, but you will also return to work even more efficiently than before.