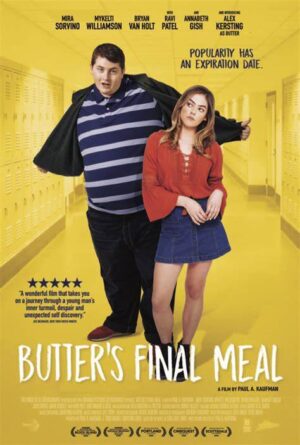 Permalink
Philanthropist and producer Julie Bram gives readers a look behind the scenes.

On Feb. 25, “Butter,” director Paul A. Kaufman’s feature film debut, was released in theaters. The film, originally released in 2020 at the Cinequest Film & Creativity Festival and the Socially Relevant Film Festival, follows titular protagonist Butter as he struggles with social acceptance at his high school.

Butter, bullied for being extremely obese but fed up with his social status, devises a plan: On New Year’s Eve, he will eat himself to death on the internet. Immediately, Butter gains newfound attention from his classmates, who begin to see him differently and talk to him about his plans, treating him more positively as a result.

The film struggles slightly in its storyline; Butter’s newfound friends like him, but don’t do anything to discourage him from his suicide plan. Overall, however, it’s a sweet film with a message of acceptance and the importance of kindness despite superficial differences. The Falcon had the chance to interview Julie Bram, a producer for the film, about it.

Q. What first drew you to the movie’s concept and why did you decide to do it?

My husband and I are actually both in real estate — my husband is in finance and real estate, and I’ve spent much of my adult life in charity and philanthropy. The filmmaker is actually my brother, Paul Hoffman, and around six years ago, he said he wanted to discuss his latest project with us. At first, my husband said he wouldn’t even give him a penny, but he came over and explained the concept of “Butter’s Final Meal” and how it was based on a young adult novel by Erin Jade Lange. As soon as he finished explaining, I asked him how much he needed — and that’s how we got involved in this amazing independent film. We didn’t have any backing from any kind of studio or streaming platform. We made it ourselves, and this is like the first universal project my husband and I have taken part in.

Q. What was it like working on the movie?

As executive producers, we were really responsible for raising the money. The budget was only $1.7 million which is really, really low for a film to be made. But it was kind of a miracle how my brother did it on a shoestring after getting some of our friends and colleagues together. The thing about this film is that everyone involved — from the cast, the filming crew, to the studios — all were gravitated to the themes of this film and wanted to make a difference in the world. So it’s been sort of elevating and life-affirming; it’s really been an incredible experience. We’re also getting a huge response from teachers and counselors and librarians.

Q. With the film airing this year, what are you currently up to?

Right now, we’re trying to get the word out. I’m also trying to get through the emails and messages we’re getting from people all over the world, saying they can’t wait to see the film and how much it resonates with them. Seeing the impact this film has is really exciting. Some of the emails say, for example: “Thank you for reaching out to someone who has personally struggled with mental health issues such as depression, anxiety and ADHD and has been diagnosed with a mood disorder, not to mention has struggled with my own physical appearance. I relate in a lot of aspects to the film.” The film is warm-hearted as we’re tackling so many issues of a teenager, but also comedic in a way. We’re so excited for more people to see it, and we’re living in the moment.

Q. Did you have any difficulties working on the film?

The main challenge was staying on budget. As I mentioned, it’s really hard to make a good movie at such a low cost. Thankfully, my brother’s whole adult career has been in the making of TV shows, so we got a studio at a great rate, donated cameras and Dell computers that were sponsored. Many people wanted us to make this movie, so they were really helpful.

Another hardship was a specific scene when Butter, the main character, had to jump off a cliff into the water. Because there was a drought the year we filmed (about four years ago), my brother couldn’t find a place for him to jump. And so we started thinking, maybe we could find someone with a big swimming pool and he could jump off the roof. Eventually — I don’t know how my brother found it — but he did a pool and the scene looks great in the movie.

Q. Who is the target audience for this film?

“Butter’s Final Meal,” though it will appeal to teenagers, can also be enjoyed by anyone with special needs or specific mental health illnesses. I think anyone who raises a child will want to see the movie. It’s also a great movie to see with one’s parents and spark a discussion. Honestly, it’s really got a universal appeal.

Q. What do you hope viewers gain from the film?

We have a whole campaign launching called “R U OK?” to sort of help people open up. I think there’s the definite message that over time things will be OK and that there’s always someone available to help. You know, Butter goes through his own struggles — there are people and there are resources. I also remember a campaign that was launched by somebody who jumped off the Golden Gate Bridge, who as soon as he jumped, regretted it. He survived and reached out to a few others that also survived who also said they regretted it and felt the same way as he did. That’s really the universal message, to seek help. We also list resources at the end of the movie and the “R U OK?” page on our website.

Q. Do you have any goals regarding the film for the future?

Originally, “Butter’s Final Meal” was going to open in around 25 to 20 theaters across the country. Apparently, though, AMC and some of the other theater companies loved the movie so much that it’s now showing in close to 200 theaters. We’re really excited and after its national release, we hope to get a good international deal. The more we release it, the more alive it becomes.

I got an email this morning from a rabbi in Israel who saw one of our Facebook posts and said that we need the movie there as well. We’re just hoping to make a difference in the lives of teens and promote wellness.

We’re also doing a TikTok campaign, and it would be great if people could follow the film on TikTok — we’ve got Jack Griffo and so many other amazing people on board.

Q. Anything else viewers could look out for?

At the end of the credits roll, there’s a really nice shout-out to my husband and me in a really cute way. Pentatonix also has a song playing through the credits, and it’s really beautiful.

The film is like our baby, and has become a real family passion project. We want to see it soar and do good in the world.