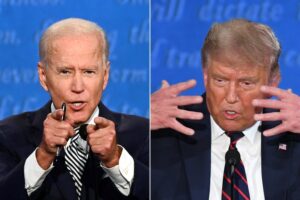 President Trump and former Vice President Biden talk over each other, making it hard to understand.

One thing, if not the only thing, the first presidential debate showed Americans was that debates need stronger regulations.

After the first presidential debate on Sept. 29, it’s safe to say that most viewers were disappointed, if not aghast. Regardless of which political party or candidate you support, the level of blatant aggression and lack of focus was very apparent in the debate.

Most of the hour and a half was taken up by listening to each candidate promote his own agenda, watching them avoid questions and wondering which statements were factual and which weren’t.

While it would be ideal to see each candidate  stick to the designated rules, the only realistic solution to this problem is to have more rigid regulations.

The only way to address this would be to have stricter rules that prevent candidates from answering with completely unrelated topics. If a candidate were to completely avoid a question, it would be far more effective if the moderator could remind them of this and prompt a more relevant answer to the question.

Still, as seen in the last debate, candidates often completely ignore the moderator, which presents yet another issue.

If there were only a few interjections, this might be acceptable, but as we saw on Sept. 29, it was hard to even tell who was supposed to be answering the questions at times. While the moderators do attempt to halt interruptions, these often yield little improvement in the discourse.

Although this might seem harsh, the only solution is to turn off each candidate's mic when they aren’t speaking. This way, candidates would be given the amount of time they deserve without interruptions, and the other side would be able to respond afterward. The point of the debate is not to hear candidates talking over each other; it's to inform the people on who they are voting for.

Aside from the chaos of the debates, in recent years, false information has become a greater issue, especially with the increasing availability of the Internet. Misinformation is constantly clogging our computer screens and news feeds, and a live, in-person debate should serve as a break from fake news.

But that isn’t always the case. As everyone has seen, candidates spew false information during their debates as well, denying viewers the right to truths about the issues candidates address.

One way to ensure viewers understand the facts behind debate issues would be to have unbiased fact checkers on the premises of the debate, constantly informing us of things said that may be untrue. These updates wouldn’t have to be immediate and could be off-screen or during breaks, but it would be beneficial to hear what is true and what isn’t every now and then, regardless of which side it comes from.

While the vice presidential debate on Oct. 7 proved to be considerably more successful than the presidential one, it still involved many interruptions, instances where candidates exceeded their time limits and multiple pieces of false information. It’s clear that debates in general have been carried away from what they were initially intended to be.

Few people enjoy watching a heated argument, and it is only fair to give the people what they deserve: real answers. We can hope that candidates will pick up the slack and work toward a more successful debate, but it is time that the debates themselves evolve to accommodate an ever-changing world.