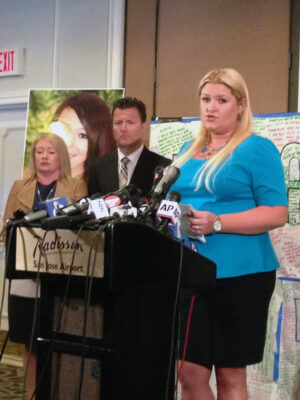 The family of Audrie Pott, accompanied by family attorney Robert Allard and two investigators, spoke to the public at a news conference on Monday at a San Jose hotel and announced that they are filing a wrongful death case in Santa Clara Superior Court against three sophomore boys who were arrested Thursday.

The family of Audrie Pott, accompanied by family attorney Robert Allard and two investigators, spoke to the public at a news conference on Monday at a San Jose hotel and announced that they are filing a wrongful death case in Santa Clara Superior Court against three sophomore boys who were arrested Thursday. (Two of the students attend the school while the third now goes to Christopher High School in Gilroy.)
This is the first time the family has spoken publicly since the arrests of three sophomore boys who are accused of sexually assaulting Pott while she was unconscious at an unsupervised house party over Labor Day weekend and then spreading illicit photos of Pott.
“Based upon the investigation we have conducted, sadly, not only did these despicable things happen, but we believe that Audrie decided to end her life as a result of what these young men did,”  Allard said.
Lisa Pott, Audrie’s stepmother, read some messages that the family found Audrie had sent through Facebook.
“My life is ruined…,” Audrie wrote. “I can’t do anything to fix it … I just want this to go away … I’m in hell.”
Allard said that the Pott family is filing a civil suit against the family who owns the house where the unsupervised party took place. An investigator said 13 sophomores went to the party.
Allard and the family said they plan to address the dangers of cyberbullying, sexual assault and harassment among teens, and involve politicians in order to create a law in Pott’s name. “Audrie’s Law” is still in the research phase, according to Pott’s mother, Shelia Pott.
“It is the family’s goal that the community is made safer by holding these young men accountable,” Allard said.
Allard said the statements from the defendants’ lawyers, which said that there was no connection between the boys’ actions and Pott’s suicide, “sent [him and the family] over the edge.”
Allard expressed anger that the defense attorneys or families of the boys did not offer condolences to the Pott family and does not believe the defendants show any signs of remorse.
“These boys, and perhaps their families, to this day, refuse to accept responsibility, and that’s what the court system is for,” Allard said.
Sheila Pott and Lawrence Pott, Audrie Pott’s father, both gave statements attesting to their daughter’s kind, fun-loving character. Lawrence Pott, struggling to speak through tears, remembered Pott as the “wittiest and funniest kick-in-ok the-pants you’d ever meet,” with a passion for art, music, soccer and the outdoors.
At Monday’s news conference, Sheila Pott confirmed that she did believe her daughter had been bullied before the alleged assault. However, Allard said that they were not prepared to talk about the bullying that occurred before the sexual assault.
The Pott family and attorney emphasized that they did not care about how widespread the photos were at the school, though the investigators did confirm that, to their knowledge, the photos were not uploaded to Facebook or other social media sites.
“I don’t care if it was 10 people who knew or 100 people who knew …,” Lisa Pott, Audrie’s stepmother, said. “In [Audrie’s] mind, it was an epidemic, that everyone was talking about it.”
Sheila Pott also said at the news conference that  “Audrie saw people crowded around cell phones, looking at pictures at school.”
Lisa Pott confirmed that the district attorney has the photos, but that the family chose not to look at them at the recommendation of the district attorney.
The investigators and Allard said they have had some difficulty but also some success in getting students to come forward as witnesses.
At the news conference, Pott’s stepmother Lisa Pott said the week after the incident, resource officers from the school district went to the Pott’s home and told the family that they were having trouble getting the evidence because one or more of the alleged perpetrators had “lost or broken” their phones.
Lawrence Pott said that the family and investigators are asking students “to do the right thing” and come forward with information.
“There’s only two options here: You can stay quiet, you can hide, you can cower, or come forward. It’s going to be OK,” he said.
In response to a report in The Saratoga Falcon that around 10 students had seen the photos, Lawrence Pott said, “The student newspaper today reported that they have evidence that 10 kids had seen those photographs. Well, we’d like to have the names of those 10 kids, that’s reasonable, and we’d like to talk to those 10 kids."
Additionally, Allard said they were not comfortable talking about “any liability, if any, against the school district” because the investigation is ongoing.
According to Lisa Pott, principal Paul Robinson met with the Pott family at the end of September. Robinson told the family that the boys had been disciplined and removed from the football team. Lisa Pott said they requested that the school district expel the boys from the school, but the school district did not because the incident took place off campus.
Lisa Pott said Robinson did not explain why the school took action against them as athletes but not as students.
3 views this week