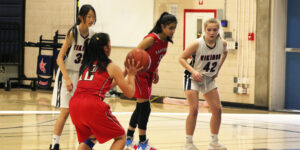 Sophomore Lisa Fung plays basketball with teammates before the pandemic.

If sports happen this school year, athletes will be able to participate in multiple teams during a single season this year.

Right now, all school sports have been delayed until 2021, and the standard three seasons of sports — fall, winter and spring —  have been condensed into two seasons — Season 1* and Season 2**.

These guidelines, along with other current procedures involving sports, will depend heavily on the county’s current safety level and color tier system. The California COVID-19 color coded tracking system is divided into four color tiers: purple (widespread risk level), red (substantial), orange (moderate) and yellow (minimal). As of Nov. 16, Santa Clara County has moved back into the purple tier, which means that sports will be heavily restricted.

According to a press release sent out on Dec. 1 by the California Interscholastic Federation (CIF), the governing body of sports in California, all school sports will be postponed until Jan. 1 at the earliest.

Sophomore Mika Tippetts, who would have participated in color guard, a fall sport; basketball, a winter sport; and track and field, a spring sport, now hopes to play these all simultaneously during Season 2, which was originally scheduled to run from Feb. 22 to May 29.

“I don’t think I could pick between my sports if I were only [allowed] to play one,” Tippetts said.Tippetts has played basketball since she was 5, making it her first sport.

“For me, basketball is a never ending journey, something that is constantly changing and evolving, and that is all part of the fun,” Tippetts said.

In the same year, Tippetts recreationally started Color Guard, but began taking the activity more seriously when students from the Music Education with Saratoga High program (MESH) from SHS sparked her interest.

With strong backgrounds in each of these sports, Tippetts’ passion is distributed evenly between the three. She appreciates that the school will be allowing students to participate in multiple sports in a season.

“I wouldn’t be able to pick between the sports that I play,” Tippetts said. “I feel that I have a duty to my teammates, and picking one over the other just seems wrong to me.”

However, athletes who want to play two sports will need permission from coaches of both sports to play, and must then work out a practice schedule. The league has always allowed students to play two sports in a season, but coaches usually don’t allow their players to do so. Due to the condensed seasons and the pandemic, coaches this year have been asked to be more flexible with this. Still, athletes must designate a primary and secondary sport in the case that conflicts do occur so they can determine which sport to prioritize.

With sports practices often five days a week, Tippetts says each sport can be a big time commitment. Trying to juggle the standard schoolwork and extracurriculars along with multiple sports in a season may be incredibly time consuming, she said.

Sophomore Lisa Fung will also face this challenge of balancing out her activities, as she too hopes to play two sports in Season 2: basketball and track and field. Fung started participating in both sports in sixth grade on the Redwood Middle School teams.

“I enjoy playing these sports to push myself, learn new skills, and to be around and work together with friends that are motivated and supportive as well,” Fung said.

Fung said she hopes she will be able to juggle both sports during the season considering she participated in both for a similar amount of time.

“I don't want to miss either basketball or track,” Fung said. “I think that [the option to participate in multiple sports in a season] is fair for the students who planned on playing more than one sport, but it will probably be a little difficult to schedule and plan everything out.”

Lugo also acknowledges the difficulty in managing a student’s schedule, and said if a student has a heavy course load and wants to take two sports in addition to it, they would have to have a long talk about the time commitment to juggle all the activities.

“Can you do it on paper? Sure. But physically, can you handle that?” Lugo said. “Those are the types of conversations we have to have with kids to make sure they’re not biting off more than they can chew.”

According to Lugo, the CIF says that students cannot exceed over 18 hours of athletics in a week consisting of practices and games. The school will have a form for students to fill out in order to ensure that they understand this 18 hour time limit.

“A lot of this will have to do with kids balancing everything out, because I think playing two sports is going to be really, really hard,” Lugo said. “But we want to give people the opportunity to do that because it’s unfair that some of these seasons are going to overlap, and traditionally students are able to fit everything in.”

In addition to making scheduling more difficult for students, the condensed seasons will pose several problems for the school as well. Lugo says that with some students feeling like they may have to choose only one sport this year, on top of the fact that some will be uncomfortable returning to play, numbers will become an issue.

“At a school that’s our size, we are dependent on those multiple sport athletes to survive,” Lugo said. “We might have some sports where we can’t field teams anymore, so that’s why we’re really going to do everything we can to allow kids to play multiple sports.”

Another problem condensed schedules pose is with facilities. Some teams will have to practice at night, which interferes with academics as well.

This year’s sports seasons are still subject to change due to the constantly evolving circumstances of the pandemic, but as schedules are being worked out, Lugo said he will be happy to see students playing again.

“We’re going to have games pretty much Monday through Saturday if we can do this,” Lugo said. “I don’t care if I have to work six days a week, I’m just going to be happy to see kids on campus playing again.”