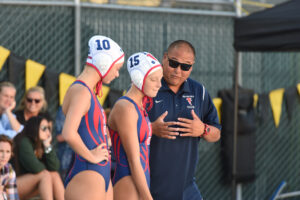 Boys and girls on the water polo teams are mourning the death of their coach Jerome Chung, who passed away unexpectedly at the age of 37 from an unknown cause on March 4. Chung is survived by his wife Marion.

As a coach, Chung was known for pushing athletes to perform at their best, winning multiple league championships and coaching players who went on to play at D1 universities. As both the the school's water polo coach, he led the girls to a second-place CCS finish in the 2018-2019 season, and the boys to league co-championships in the 2019-2020 season (they shared the title with Santa Clara High School).

Only a year earlier, the team had finished with a league record of 12-2, which affected the players’ confidence.

“I fondly remember the exact moment he offered me a spot on the varsity team,” junior Chris Wu said. “I was insecure about my play, and initially denied the offer, but every practice he continued to coax me, and I could see that he truly believed in me.”

Players said Chung uplifted his athletes, pushing each team he coached to the next level of their potential. He made players better as both people and athletes, and teams more coherent with a myriad of plays that didn’t simply rely on the team’s best scorer.

“He’s the best coach I’ve ever had and one of the more important mentors in my life,” junior Kendal Jarvis said.

“We asked him a genuine question and he responded with his usual sarcastic wit,” Jarvis said. “He had offered us dried mangoes, and when we asked if they were good, he asked ‘Do I look like the kind of person that would eat something if it wasn’t good?”

Outside of the pool deck, Chung often joked with his players, but during practices and games, he pushed them to their fullest and wasn’t afraid to hold back.

“I’ve sweat and bled and cried because of his advice and words sometimes but I would do it all over again if I could,” Jarvis said. “Besides my family, he’s seen me grow more than anyone as a person.”

He said those moments were “priceless memories,” and that Chung has helped prepare him for his future.

“I just hope I can pass on the lessons he taught me,” Jarvis said. “He’d want everyone to suck it up, persevere and never quit.”

Jarvis said he wants to play hard as a tribute for the work and effort Chung put in.

“I can’t speak for the team but I know I’m fired up and want to win for him,” he said.

Junior Marcus Kuo was coached by Chung since he was 11 years old, from club to playing for Saratoga High. Kuo recalls the first tournament Chung coached him in: the Santa Cruz Biweekly tournament in 2015.

“Even though we only had one tournament in Santa Cruz and three practices with Jerome before traveling to Southern California [for the National Junior Olympics], our team ended up with a silver medal in our division,” Kuo said. “His positive attitude helped us play well throughout the whole four-day tournament.”

Kuo said Chung’s coaching inspired him to stick with the sport, but Chung was also someone he could discuss his life goals with.

“He really put his time and effort into helping others,” Kuo said. “From working with special needs students during the day, to coaching both the SHS boys and girls practices and games, as well as doing club coaching, he was truly dedicated to making those he was around the best they could be.”

Chung’s friends began a GoFundMe campaign to support his family, which has raised over $45,000 as of March 12.

Jarvis, Kuo, Wu and the rest of the boys’ and girls’ water polo teams also met on March 11 to sign two cards where they described their appreciation for Chung. Filled with signatures and messages expressing gratitude, the athletes shared stories and memories of their experiences with Chung.

“I want everyone to know just how much he cared about all of his players,” Wu said. “The love he had for each and every single one of us is inexpressible through words, but we all knew how much he loved us through his actions.”