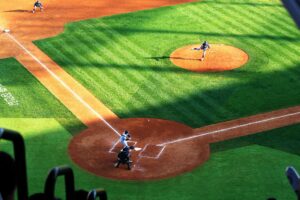 Recap: The pandemic cut the team’s season short, leaving not knowing what their potential was.

The theme for the season is to play ball again.

“I think playing games again will be a big relief for these kids,” head coach Sean Hodson said.

Hodson said about 20 players signed up to play, making it likely there will only be only a varsity team instead of varsity and JV.

The team will play its first game on April 24 against Gunn. They will play 15 games. Practices started April 1.

The team will also be making some changes to adhere to all COVID-19 safety protocols, such as wearing masks near people and social distancing.

Hodson said that while the team had some logistical issues with social distancing inside dugouts and getting transportation to games, the safety of players would not be compromised.

“We are under protocols which are always being changed,” he said. “So we are following whatever the rules are on any particular day.”

Despite increased restrictions, senior Ryan Gilligan, one of the team’s star players, said he was glad baseball is back.

“I’m very excited to go back to baseball and hopefully compete for a league championship,” he said.