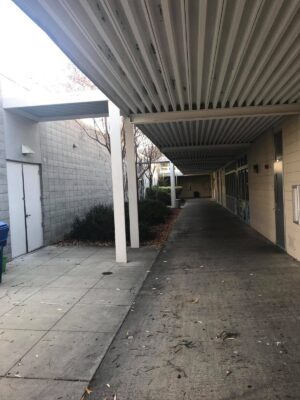 The hallways of the school are empty as the district continues with online learning.

After moving into Phase 2 of remote learning in the fall, the district had begun to plan for the transition into phase 3 — hybrid schooling — as they anticipate COVID-19 measures slowly lifting. But due to Santa Clara County moving back into the purple tier last November, these plans have been delayed, and when the school can proceed with its transition remains unclear.

Phase 3 hybrid learning entails some students attending in-person school on an alternating, part-time schedule, while the rest remain at home for remote learning. Those in the former would be set into permanent cohorts that would be allowed on campus for school on specified days. For example, some students would attend on Monday and Tuesday, while others would attend on Thursday and Friday.

The prospect of returning to school in Phase 3 has raised mixed opinions among students. The decision to return is voluntary and students have the option to opt out. Most are hesitant about such a move and would only consider it if the risk of contracting the virus is decreased.

“If the right measures are taken, I will feel comfortable going to school,” junior Glenn Liang said. “However, I realize that something is always going to go wrong. Some people don’t like to follow instructions, and the rest of us will have to suffer the consequences. Currently, I’m not comfortable going back.”

This sentiment is shared among many others. Sophomore Trevor Leung also expressed concerns about maintaining a safe student environment and suggested requiring all students take a COVID-19 vaccine or having students attend school through small cohorts to minimize the risk of widespread contamination.

Currently, the timeline for the deployment of vaccines is unclear, but public health officials have indicated the possibility that the school staff will have access to vaccines as early as February, while the vaccine would be available to the general public (including students) as early as late May or early June. However, according to district superintendent Mike Grove, the state has yet to release any further information.

Still others are less accepting of these risk prevention methods. Sophomore Siddarth Kamannavar said any instance of COVID-19 in California would be enough for him to refuse to attend.

Concerns about the effectiveness of a hybrid model have also been raised, as the rotation of students to and from school may cause more issues as teachers manage both in-class and online learning.

“I think hybrid will be less effective because there would just be so many things going on at once,” Liang said. “In addition, things can’t be as interactive because there are just too many rules that we have to follow if we’re in person.”

Still, hybrid schooling may not be completely ineffective. For some classes, teachers feel that being in-person will be more beneficial than being online.

“I think the hybrid model would be beneficial for AP Physics — I could do live demonstrations and students could see the lab materials in person,” said AP Physics and Principles of Engineering teacher Matthew Welander. “But I don't think it would work well for the Principles of Engineering class. We start our programming and robotics units soon, and this requires the daily use of materials.”

Despite the many measures required before hybrid schooling can come to fruition and students can feel safe, the prospect of returning to in-person school is a hope that many share.

“Even though it would be a hybrid system, it would still have a school atmosphere,” Liang said. “I miss the sound of bells signaling the start and end of each period, the groups of friends hanging out at different places, and just the ability to talk to a face and not a computer screen.”