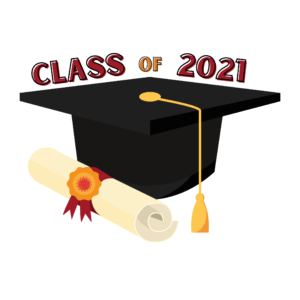 Permalink
The respective organizers are confronted with pandemic-induced uncertainties and strained budgets.

Unlike the Class of 2020’s drive-through graduation in the front parking lot, this year’s ceremony is set to take place in-person on the football field on June 3 at 10 a.m., according to assistant principal Matthew Torrens.

While the basic framework for the ceremony has been set, details remain up in the air due to the county’s restrictions and other uncertainties.

On June 3, graduates will walk single-file onto the field while wearing face masks and maintaining a 6-foot distance from each other, Torrens said. The ceremony will retain traditions such as speeches, the handing out diplomas (perhaps with an elbow-tap instead of a handshake) and professional photos of the graduates.

What school officials are aiming to prevent is a celebration with intermingling; for this reason, the graduates and audience members will enter and exit through designated entrances. Additionally, a ticketing system might be implemented to limit the size of the audience.

To maximize the number of audience members allowed while accommodating social-distancing rules, attendees will be seated on the bleachers on both sides of the football field, rather than just on the large bleacher used in previous years. As a result, the ceremony has been re-oriented, with the graduates facing Herriman Avenue, Torrens said.

The set-up will also be different because of the additional technology.

“Our two priorities for the graduation are the sound system and the live stream because not everyone is going to be able to come,” Torrens said.

The uncertainty lies in the number of people each graduate can bring. According to the county guidelines, schools can only allow up to 23 percent of the facility’s maximum capacity to be filled in the Orange Tier, which is the county’s current status. But if the county moves into Yellow Tier, the number rises to 67 percent.

“The county has a lot of criteria that we’re going to follow, and we’ve not been able to identify an accurate number,” Torrens said. “We’ve been looking through old construction plans of the stadium, but the numbers are outdated.”

Another limitation is the district’s two schools need to coordinate — rules dictate that if one school does something, the other must do something similar, Torrens said. This eliminates the possibility of setting up chairs in the field to accommodate a larger audience.

Torrens said the administration is exploring the idea of allowing graduates to walk in self-chosen cohorts with their friends as they go through the ceremony instead of coming in alphabetically.

“It’s something we’ve never done before, but we want to give the graduates more of a catered event,” Torrens said. He stressed that this idea might not happen.

Later on June 3 will be Grad Night, which will start at 10 p.m. and end at 6 a.m. with the senior sunrise, said committee chairperson Beth Kingsley.

For this year’s Grad Night, while there will not be assigned cohorts, limitations will be placed on partitioned areas of the gym. Additionally, the entertainment — a hired group that will be a surprise for the graduates — will perform twice for two separate groups to put a cap on the number of people in the small gym.

Additionally, instead of serving finger foods in large quantities, the committee is attempting to figure out a way to pack food individually, said fellow chairperson Monica Reddy.

With a solid plan in mind, Kingsley said the committee has largely overcome the initial challenge of “getting a finger on what we were able to do because we started off so many iterations of what Grad Nights might look like. Now, the biggest challenge is getting students to participate.”

Normally, about 90 percent of the senior class buys tickets, and according to surveys, 94 to 95 percent of parents and students express a willingness to participate, she said. However, the ticket purchase rate is currently about 60 to 70 percent, so the committee is trying to reach the last 100 or so students.

The low number of purchased tickets puts a strain on the committee’s budget, Kingsley said, so they might have to do some more last-minute fundraising.

The tight budget is also caused by increased expenses, including the cost of sanitizing stations, hiring the entertainers to perform twice, packaging foods and hiring an additional custodian, Kingsley and Reddy said. All of these factors forced the committee to make this year’s tickets more expensive than before: Tickets started out as $205 in early March and were raised to $235 shortly after spring break.

“That might seem like a lot of money for a night of fun, but we are worried we wouldn’t make our budget,” Kingsley said. “Hopefully people will view it as ‘gosh, this is one of the only events we’re really going to have this year’ and decide to participate.”

To purchase Grad Night tickets and submit photos for the memory board and senior video, please visit the SHS Grad Night website.