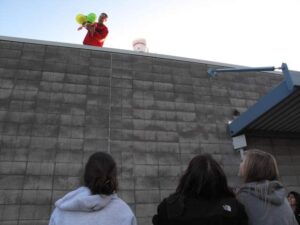 As many students were busy concentrating on bubbling the first few answers for their finals week of Jan. 11, Kirk Davis' physics classes gathered outside to drop eggs from the roof of the science wing.

As many students were busy concentrating on bubbling the first few answers for their finals week of Jan. 11, Kirk Davis’ physics classes gathered outside to drop eggs from the roof of the science wing.

But the purpose was far from creating a sticky mess on the ground. In fact, it was the opposite: Students formed groups of up to three students and were given the task of designing and building a container within a fixed budget and list of materials to prevent the egg from cracking. One group tried to use a parachute to slow the egg’s decent while another used a balloon base to provide padding.

“[The students] are investigating impulse, a principle of physics, which is change in momentum.” said Davis. “The amount of force on something depends on how long it takes to stop, so they have to increase the amount of time it takes for the egg to stop.”

The week before finals, the classes were busy discussing designs, tying balloons, cutting string and wire, folding paper plates into cones, gluing popsicle sticks and stuffing in cotton balls. In addition to the difficulty of the task, some students also faced unexpected challenges.

“The designing process was a difficult because we lost some of our resources for the project.” junior Tasha Patel said. “One of our balloons popped so then we had to change our entire idea.”

About half groups achieved the engineering feat, according to Davis, earning three extra credit points while others received partial credit for eggs with slight damage.

“Our egg cracked,” Patel said, “because the whole thing flipped sideways and the egg didn’t get much protection when it hit the ground.” Still, they earned two points for their efforts.