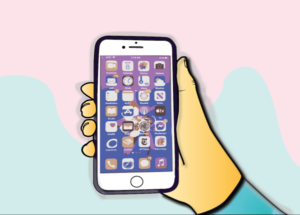 Like most people I know, I am unhealthily addicted to my phone — in my case, an iPhone 6.

In recent years, it has been the last thing I see before I fall asleep and the first thing I look at when I wake up. I panic when separated from it, even if I don’t really need it.

A couple weeks ago, I realized that I had a genuine problem when I opened Instagram, closed it and opened it again about five seconds later. I felt like a drug addict who needs the next fix.

After having a bit of a crisis, I decided that I needed to stop relying on my phone (and laptop) for constant entertainment. Much easier said than done.

I also don’t sleep as much as I should — maybe only seven to eight hours on a good day, and four to five hours on a bad day — so I was curious to see if staying off my phone at night would help fix my sleep schedule. I also wanted to see if eliminating distractions would help me be more productive and focus on my work better.

The first thing I did was delete all my social media apps. Scrolling through TikTok and Instagram has always wasted hours daily and is often a source of unnecessary frustration (people getting canceled, political issues, etc.).

Next, I decided to stop spending so much time on my phone before bed. Because screens emit blue light, looking at them at night can interfere with sleep and potentially cause eye problems.

It pains me a bit to admit this, but I have lost my 20/20 vision over quarantine. Obviously I can’t get it back, but preventing further damage is ideal.

Unsurprisingly, the first two weeks of my phone “diet” weren’t very fun. I had to actively fight the impulse to reach for it every time I was bored, and I found it difficult to fall asleep early.

I ended up mostly using my extra time to read and go outside more — nothing particularly interesting, but probably healthier than sitting at my laptop.

I had a particularly bad setback over the weekend, as I started watching the Netflix series “Spinning Out” and didn’t stop for about eight hours straight. Not my finest moment.

After that, I enlisted the help of my parents, who were all too happy to stash my devices somewhere before I went to bed.

Thankfully, I settled into a bit of a routine over the second week. I used my laptop to go to class. I tried to actually pay attention instead of going on my phone. Later I used my laptop to finish my homework. Putting away my devices, I read for a while before bed.

Surprisingly, I’ve found that I’ve been in a much better mood after I started using my phone less. I’ve also started being more productive and procrastinating less. Maybe it’s because of the extra sleep. Either way, I plan to keep doing what I’m doing for the most part.

I don’t doubt that I’ll have a relapse at some point (probably when I decide to redownload TikTok out of boredom), but it was nice to disconnect for a while. Honestly, I didn’t realize how much time I had been wasting until I decided to spend it doing something else.