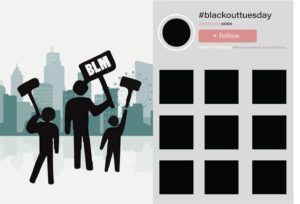 Permalink
Bringing awareness without providing specific ways to take action leaves issues the same as it was before.

After George Floyd was killed by Minneapolis police on May 25, 2020, the Black Lives Matter Movement resurged, inciting a wave of social media activism. Soon enough, Instagram feeds were covered with informational slides on microaggressions that belittle the Black community and petitions to arrest police officers, including those who shot and killed Breonna Taylor on March 13, 2020, while sleeping in her home. Activism was at an all-time high with other members of minority groups also speaking out and sharing their own experiences in a white heteronormative society.

However, with this increase in political activism, the public also saw an increase in performative activism. Performative activism means people are advocating causes for their own social standing instead of actually furthering a movement or an issue, according to Medium.com. Much of social media activism risks failing the test of furthering a movement.

Some activists, such as Los Gatos junior Calyx King, have tried to combat performative activism by making an effort to go beyond posting.  King runs a TikTok account with about 17.7K followers, publishing videos on @bimboancom.

“To make sure I am making an impact, I casually call out injustices when I see them on a daily basis,” King said. “I also attend protests and actively immerse myself in content and culture that helps me be a better ally and consciously make decisions about where my money and effort goes.”

This growth in social media activism was evident through the way that many express discontent about social issues through social media. One example of this was Blackout Tuesday, where Instagram users were encouraged to post nothing on their social media except a black square.

The Blackout Tuesday trend stemmed from #TheShowMustBePaused, created by two music executives, Brianna Agyemang and Jamila Thomas, who wanted to bring to light the racism and inequality in the music industry. Participants were encouraged to use the hashtag #blackouttuesday, when reposting the black square to bring awareness to injustices of police brutality.

However, there was confusion with the hashtag as people also added the hashtags #blm and #blacklivesmatter into their captions, despite the fact that were intended only to be used for members of the Black community to share their experiences with discrimination. The black squares flooded the latter hashtags, drowning out posts by the Black community.

While some who participated in this trend wanted to support the Black community, their silence on the topic, other than reposting the black square, would be considered a form of performative activism. According to a VOXATL article, the black screen served as a cop-out to people who were silent about the injustices surrounding Floyd’s death and shifted the conversation away from addressing the issue.

“It’s important to bring awareness to issues and help speak up for others who can’t, but it is even more important to not drown out the voices of those people who are actually the ones affected by these issues,” King said.

The negative impacts of performative activism become clearer with the controversy with supporting Black-owned businesses. While some donated and bought from these small businesses, most simply posted about its importance and then continued to purchase from big-name corporations such as Amazon and Shein.

Consequently, many, including Forbes Magazine, saw buying from Black-owned businesses as a trend, as interest peaked during special occasions such as Black History Month or during times of high social awareness. Once the hype dies down, these businesses see a predictable decline in customers.

Instead of just buying one product from a Black-owned business during Black History Month, it is important to add Black-owned restaurants to your list of go-to food places, or increase engagement by telling other people about it or writing reviews for the store.

Another form of performative activism that became popular this year is the creation of nonprofits. Senior Urmila Vudali, who is a member of the Silicon Valley Youth Climate Action and part of the Tech Museum Student board that focuses on youth education and engagement with climate issues, finds it frustrating that the main motivation behind forming some of these nonprofits is college applications instead of enacting real change.

With the negative response that performative activism has incited, many including junior Noora Fayad have tried to combat these tendencies and make sustainable change on social media.

“Posting noteworthy and factual information on social media platforms is extremely important as the majority of people spend a lot of time on it,” Fayad said. “It provides a platform for underrepresented voices and allows people to stay updated on news around the world.”

Fayad consistently posts about important news in the world and ways to help out in issues related to human rights and politics on her Instagram story.

According to Vudali, other sustainable actions include donating, signing petitions, joining organizations to help promote a specific cause, taking part in protests and interacting with the community, specifically talking to elected officials.

“Elected officials often really appreciate what we have to say here, at least in California,” Vudali said. “By doing this you can often find actions to take, like creating art or starting your own initiative.”

The bottom line is that while awareness is important, what’s substantially more impactful is creating sustainable change — changing hearts and minds in ways big and small.

Saratoga High, for example, has established an anti-racism task force to develop a more well-rounded education instead of the mainly Eurocentric version most are used to. The task force also opened up a branch of Living Room Conversations, a national nonprofit that promotes having tough conversations surrounding race or any other issues that the community wants to talk about.

“The Anti-Racism Task Force is working with the SUSD school board to implement more diverse histories and viewpoints,” said junior Brooke Huynh, a task force member. “We’re trying to make sustainable change through expanding the curriculum and creating a space where students can voice their opinions and learn about others’ viewpoints on issues.”

While it is often hard to draw clear lines between performative activism and sustainable activism, the importance of finding that distinction is as evident as ever.