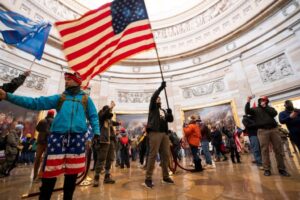 Protesters break into and riot at the capitol.

Was a public school teacher protesting before the insurrection at the Capitol on Jan. 6 a mere exercise in freedom of speech or something far more sinister and deserving of punishment?

That was the question facing the Allentown School District in Pennsylvania. Their answer: They suspended the teacher.

When middle school social studies teacher Jason Moorehead posted pictures on social media of him attending the Trump rally before the riots on Jan. 6, parents and other members of the community were outraged.

After the district received hoards of complaints, officials temporarily suspended Moorehead to investigate whether he had attended and supported the riots.

Although Moorehead claims to have been completely uninvolved in any of the insurrectionist activity at the Capitol, several of his social media posts from the day paint a suspicious picture.

While he posted some relatively harmless content of him wearing a MAGA hat and “doing his civic duty,” the ironic timing of this at the same time of the attack made his actions seem not only politically ardent, but possibly violent and illegal. This continued when Moorehead posted additional images of a man climbing on the senate dais, as well as a caption saying, “Don’t worry everyone the capitol is insured.” Since his social media posts directly traced back to the insurrection, they were not received well.

While Moorehead’s extremist and distastefully timed actions provide adequate cause for suspension and an investigation into his participation in the riots, the true extent of his actions is debatable.

The line between expressing political views and attending a violent riot seems to blur when the president himself condones said violent riot. Additionally, Moorhead insists that he did not actually go to or enter the Capitol building, but only attended the political rally beforehand several blocks away.

If this is true, then Moorehead’s suspension might appear severe. In fact, Moorehead said that because of the incident, he had been forced to call the police and take safety measures in his own home to protect himself. He also said he has received multiple letters of death threats.

While these circumstances are unfortunate and possibly dangerous, they aren’t a result of the school district’s actions, which were reasonable for the given situation. Since many of Moorehead’s social media posts pointed toward his attendance at the violent riots, the schools took action to appease the community, make time for investigation and not jump to conclusions.

The district also clearly stated that the cause for the temporary suspension was not Moorehead’s political views, but his possible involvement in the dangerous riots. With Moorehead being a middle school teacher, his actions could have a drastic impact on his students and what they believe to be acceptable, so the school’s actions were quite reasonable.

Regardless of whether Moorehead actually attended the riots, the school district took justified action to set an example for other members of the community regarding the proper conduct in an inflamed political climate where even a spark of tension can lead to violence.

While the outcome of the investigation has not been published yet, if Moorehead’s involvement is proven to be purely at the rallies and not at the riots, he should be given his job back. Despite his beliefs being controversial, as long as they are not directly correlated with violence, they are protected by his First Amendment rights. His suspension was never based on his political views, but rather his potential involvement with the riots.

All the same, Moorehead’s consequences only enforce the reality that social media platforms are morphing from casual sites to share information into serious places where nothing is forgotten. The ability to share endless information to anyone in the world in a matter of seconds is a privilege that must be used with caution.

Social media encourages impulsive thinking by allowing people to publicize their thoughts in an instant. This, in turn, encourages rash decision making, and influences impressionable people to think the same way. With modern day polarization, it’s important for people to think about their actions and the context in which they are perceived. Regardless of Moorehead’s actual involvement in the unlawful riots, his distasteful social media photos led to the district taking adequate consequences.