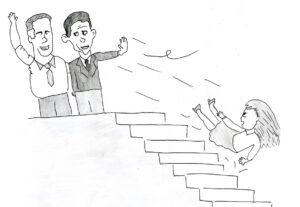 In 2008, U.S. citizens trembled at the thought of having a lipstick-wearing pitbull in the White House. Thankfully, such a fate never materialized, and blue states all over the country wiped away their tears of joy as Sarah Palin walked off the national political stage.
But like every fairy tale, there’s always a villain lurking in the shadows. In this case, it’s Wisconsin representative Paul Ryan, Republican presidential candidate Mitt Romney’s running-mate. He’s big, he’s bold, he’s like Sarah Palin with man-parts—only without something called “human decency.”
Ryan decided to follow in Missouri Congressman Todd Akin’s fumbling footsteps in early August and offend the public with his woeful, ignorant misogynistic comments. While Akin, who succeeded in becoming the 2012 Republican primary for an open Senate seat,  voiced his thoughts on how the female body could avoid pregnancy in cases of “legitimate rape,” Ryan declared that rape is just another “method of conception.”
To all the women slaving away on their keyboards, lawsuits or retail counters, life hasn’t progressed much since winning the right to vote in 1911, in Congressman Ryan’s mind. After he voted against the Lily Ledbetter Fair Pay Act in 2009, he might as well have publicized his desire for women to never leave the kitchen, or if they’re lucky, the laundry room.
The Lily Ledbetter Fair Pay Act establishes the idea that women deserve to earn the same pay as men for the same work. Women, on average, are paid close to $431,000 less than men over a lifetime for doing the same work according to American Progress, an independent nonpartisan educational institute.
Even if we dismiss this monetary disparity as male chauvinism, when it comes to abortion some might see Ryan as incomprehensible. His simplification of rape to conception was part of the defense of his belief that there are no excuses for abortion. He has voted pro-life a grand total of 59 times. Incest, rape, imminent death for the mother, you name it—nothing justifies abortion in Ryan’s eyes.
Perhaps Ryan’s most impassioned fight has been against Planned Parenthood. He hopes to eradicate the nation’s leading sexual and reproductive health care provider and advocate, which would leave millions of underprivileged women without the necessary means to a healthy life, including preventative care and protection services.
Ryan must really adore babies, because unlike our current president, he believes that birth control should be outlawed. If the Romney-Ryan ticket wins, free birth control will have had a short, savory run among American women.
But fear not, women of the universe! Ryan found his inspiration in a woman, a thinker, a guiding light and, not surprisingly, one of the most anti-feminist females to exist: Ayn Rand.
“I grew up reading Ayn Rand, and it taught me quite a bit about who I am and what my value systems are and what my beliefs are. It’s inspired me so much that it’s required reading in my office for all my interns and my staff,” Ryan said in a 2005 speech.
For those who aren’t familiar with Rand, she was a Russian philosopher and author whose perspective on gender roles was incredibly controversial in the mid-20th century. According to Rand, an “ideal woman is a man-worshipper, and an ideal man is the highest symbol of mankind.”
Ryan refers to Rand as the only clear-thinking woman he has ever met.
At a 2005 Atlas Society speech, Ryan said, “ [T]he reason I got involved in public service, by and  large, if I had to credit one thinker, one person, it would be Ayn Rand. And the  fight we are in here, make no mistake about it, is a fight of individualism  versus collectivism.”
Ironically, Ryan almost seems to promote collectivism in his latest speeches. “We are all representatives of the American people,” Ryan said. But are we? Are the elitist women of the Upper East Side and the 12-hour work shift single mothers who struggle to pay rent identical in any way? No. But do they deserve the same opportunities when it comes to incidents of rape, incest or reproductive preventive needs? Absolutely.
So, Paul Ryan, from the bottom of our hearts: Perhaps it is safe to say that you should not include yourself in this false representation of the American people. Sincerely, the struggling teen and single mothers, rape victims and women all over the world.
1 view this week