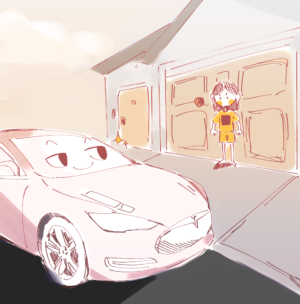 Photo by Leyna Chan
Me and my frustration, literally every day.

Permalink
If not, a trip to the tow yard might be in your future.

As someone who lives on a street right by the school, I was fuming when I found cars blocking nearly half my driveway not once, not twice, but five times in the past week. People took their sweet time with three-point turns, parents stayed for over half an hour while waiting to pick up their children (hello to the parents I glared at to move), and some even parked for hours on end during events when the school parking lot was full (I hope people enjoyed the lengthy angry letter educating them on traffic laws that I taped onto their windshield).

If you block a driveway anywhere, the owner will rightfully be unhappy. Per the saying, “poor planning on your part does not constitute an emergency on mine” — so if you block someone’s driveway, expect to pick up your car at an impound facility.

I am also a horrible driver and have places to be. That is a bad combination: There’s a chance I might hit your car even if half your vehicle isn’t wrongfully in my way. So by listening to the law, you are saving your Tesla or Porsche from a fat dent in the side.

While I’m on the topic, I also ask parents to follow right-of-way laws and not drop off their children anywhere other than the school drop-off lane.

There have been countless announcements sent out by the school about dropping off and picking up students, explicitly detailing where not to stop. Parents must simply be indifferent or woefully ignorant in order to continue these problematic behaviors.

After the Saratoga Parent Nursery School put up signs banning cars in their lot, parents simply shifted their traffic further down the street, instead of following the school’s drop-off procedures. The only time the problem relented occurred when multiple deputies stationed themselves on surrounding streets last year to ticket parents who violated the traffic laws.

Here are some reminders for those drivers: You do not need to honk your horn every two seconds just because some poor resident is trying to safely back out of their driveway; you do not need to rudely cut off other cars by unsafely swerving around them; and you especially do need to yield to pedestrians.

Countless senior citizens enjoy walking in the mornings in areas surrounding the school, and they should not have to be dodging cars left and right. Just because your child is late for school does not mean you get to create a dangerous situation for everyone on the street, including your own child.

So, parents and students, you are saving yourself time in the long run by finding a real spot to stop or waiting in the school drop-off line because, inevitably, a car will be towed or someone will be hit as the result of rushed, reckless driving. Don’t be that car.