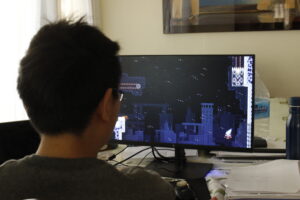 The pandemic has greatly affected my senior year, but it’s been worse for my 7th grade brother. From what I have seen, the loss of an important year of education has dealt a particularly devastating blow to younger students.

Every morning, after dragging himself out of bed to get to his Zoom classes, he is faced with an unfortunate dilemma: Click on the Minecraft app or stay on Zoom.

As a middle schooler who is challenged when it comes to self-control, my brother is on the more game-addicted side of his classmates. Even in pre-pandemic times, he would play video games during his breaks in school. Ten months into quarantine, his addiction has only become worse.

Along with a somewhat serious video game obsession, my brother has become a master at hiding whatever YouTube video, Discord chat or video game he was stealing looks at during his supposed study time. Some of my favorite strategies of his include minimizing the screen into a very small box in the display corner, pretending to close game applications when our parents roll around and the classic hurried tab switch.

All jokes aside, though his (surprisingly successful) attempts humored me for a while, I can see his procrastination increase to the point of him regularly going to sleep around midnight, way too late for a middle school student. Time lost from playing around also predictably leads to lower grades and decreased self-confidence, which in turn leads to a loss of motivation and creates a vicious circle.

With fewer social interactions with his friends, he gets aggravated more easily over small things such as needing to do simple chores and making a mistake in a video game. The only time he gets to chat with friends now is during increasingly fewer in-person basketball games and on Discord while playing multiplayer games. Because middle school is a crucial time for adolescents’ social development, this isolation may result in a more distanced generation as they grow older without proper social experience.

Out of all the negatives that come from quarantine, the one positive is that as siblings, we’ve become closer and more tolerant of one another (although I never try to get on his bad side). Without his friends at the drop of a hat to chat about the newest PewDiePie video or a new game like “Among Us,” I have become his outlet for all things game and YouTube-related. Turns out, I remember more about my Minecraft days than I thought.

Although I cannot predict the long-term effects on my brother, I see how having so many on-hand distractions can seriously damage his ability to learn crucial material properly. It may even hurt his ability to focus and interact with friends in the future. For even younger students in elementary school, isolation may affect their future social behavior, increase overall stress levels and reduce cognitive ability.

As soon as possible, schools, counties and parents need to realize the extent to which the development of their young students has been impacted and prioritize opening schools to minimize long-term social and intellectual consequences. Impacts of the virus need to be weighed against the damage to younger students’ mental, learning and social ability. In my home, the damage to my brother’s education and well-being has been significant.